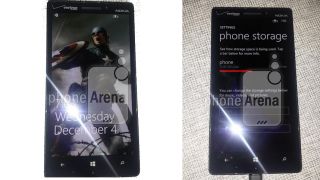 Great photos, as ever

While it's skipped straight on by the mooted November 6 release date, the Nokia Lumia 929 does still seem to be on its way as it's been caught on camera once again.

Phone Arena's source has apparently bought a prototype Lumia 929 from some shady tipster, showing off its 5-inch screen and Verizon logo.

The phone is expected to hit the US first - it was the Verizon logo that gave it away - with no inkling of whether it'll proliferate out to Europe and Australia afterwards.

Phone Arena's sources tell it that the launch date could land in mid-to-late December, which seems an odd time to launch a new phone but hey, we're sure Nokia knows what its doing.

The handset's 5-inch screen should make for a smaller-hand alternative to the 6.5-inch Lumia 1520.