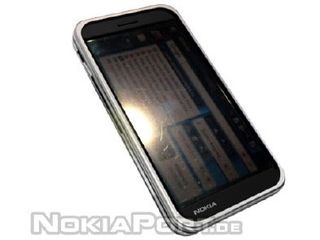 The successor to the not-yet-released Nokia N900 might have been leaked already, with the N920 shown off in spy pics.

The new phone will apparently be running Maemo version 6, the updated version of OS to be included on the new phone.

iMobile365 has nabbed a photo of what it's calling the new phone in Nokia's 'smartbook' series, with powerful processing under the hood on top of telephony options.

The phone will apparently have a 4.13-inch screen (capacitive this time, rather than the resistive effort with stylus Nokia is offering on the N900), as well as a key-boardless design.

However, NokNok.tv believes the phone will have a keyboard, and the photos have been misinterpreted, but either way it looks like it will be duking it out with the HTC HD2 in terms of power and pocket-friendliness.

Even if this N920 is true, the phone / smartbook / whatever you want to call it won't be released in the UK until well into 2010 - so you might as well get excited about the N900 instead.

NB NokiaPort.de is apparently the source of the photo, but a lengthy search through the site yielded no more information.