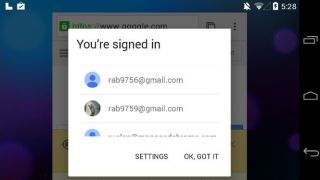 There's still some confusion over what the next version of Google's mobile operating system will be called, with fresh screenshots revealing a new moniker in the form Android L.

The images popped up on the Chromium issue tracker, but were swiftly taken down - although not before Reddit user Doopl managed to grab them.

You'll see from the images that there's a L-shaped logo in the top left of the notification bar, which many are assuming relates to the version of Android we're looking at.

The Chrome web browser also appears to be floating in the middle of the screen, similar to the pop-out apps you find on some Sony and Samsung handsets - potentially a new feature for Android L.

Apart from those relatively minor changes there isn't a great deal of noticeable change on show here.

Of course we could still be on to get Android Lollipop, although whether it will be Android 4.5 or 5 remains to be seen.