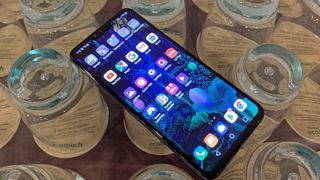 The LG V60 ThinQ could have more cameras than the V50 ThinQ, above (Image credit: TechRadar)

When it comes to smartphone cameras, LG – like many brands – seems to be under the impression that more is better. At least, that’s what newly leaked images of the LG V60 ThinQ’s rear panel suggest.

Shared on SlashLeaks, these images show a cut-out on the back that appears large enough for at least four camera lenses, which would be one more than the LG V50 ThinQ or the LG G8 had.

The name ‘V60 ThinQ’ is printed on the back, so there’s little question that this is what we’re looking at here (though we’d still take the pictures with a pinch of salt), and the images show the phone in both black and white shades.

Other than the camera and the color, the only other major detail to note is that there’s no visible fingerprint scanner. Both the LG V50 ThinQ and the LG G8 had a scanner on the back, but this suggests the LG V60 will move it in-screen, like the LG G8X and many other phones.

Interestingly, these images also look a lot like recently leaked renders of the LG G9 ThinQ, which also show a quad-lens rear camera laid out in a similar way.

That suggests the two phones could be quite similar, and they might also launch at the same time, with an announcement at MWC 2020 in February being likely.

We don’t know much about either handset yet, but it’s likely that they’ll both use the new Snapdragon 865 chipset, and at least one of them will probably support LG’s Dual Screen accessory. Based on past form though it’s likely that the LG V60 ThinQ will be marginally more impressive – and expensive – than the LG G9 ThinQ.