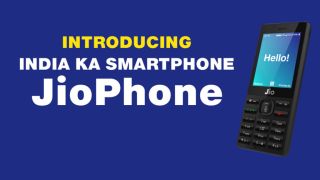 Reliance Jio will be opening the booking process for the JioPhone on August 24th. During its unveiling, Jio had mentioned that it will begin beta trials for its first 4G VoLTE feature phone in mid-August. Today, the company revealed that interested consumers and businesses can now register their interest in the JioPhone.

Reliance Jio is trying to attract both regular consumers as well as businesses. To this end, Reliance Jio has put up a page to let interested parties register their interest in the JioPhone. Since the phone will go on beta trials later this month, it will probably be available only to a small number of users.

To register your interest, head over the Jio.com and select the appropriate option – individual or business. You can leave your details like name, email, phone number and pin code if you are an individual. Businesses can leave their contact name, business name, PAN or GSTN number and the number of devices required.

Users who do not have MyJio app can also head over to their nearest Jio retailer on August 24. Deliveries will be made on first-come first-serve basis. Additionally, Jio says that the phones will start being delivered in September, with 5 million handsets expected to be delivered every week.

The “zero-cost” JioPhone was unveiled last month at Reliance Industries’ AGM, offering an ultra-affordable 4G VoLTE feature phone to the masses. Reliance Jio had announced that a special plan will be available for JioPhone users, giving them unlimited voice, SMS, data and access to Jio apps. This announcement has drawn criticism from competitors, notably Idea, for fears of violating net neutrality.

To recap, the JioPhone comes with a 2.4-inch QVGA display, single SIM with 4G VoLTE support, FM Radio, microSD card and a torchlight. Jio has also added NFC support that will be enabled later with a software update. This feature will allow you to make digital payments. Customers will have to pay Rs. 1500 as initial deposit, which is fully refundable on returning the device after 3 years.