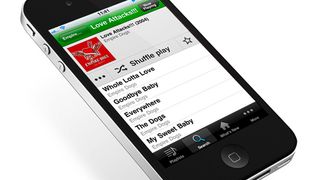 Spotify and Apple - making all the musical money

Only iTunes is making record labels more money than Spotify, according to reports.

A source 'close to the company' told Business Insider that the music streaming service is second only to iTunes in terms of revenue from music.

Although not confirmed, the news will disappoint those who poo-pooed Spotify's streaming model, reckoning that people would be loathe to pay a monthly fee to stream music rather than buying it to own.

It's not all champagne and party poppers though, as the gulf between the amount Apple makes labels (around $3.2 billion/£2.04 billion in 2011) and how much Spotify brings in remains vast.

Complete with not entirely scientific gestures, the anonymous source told BI, "iTunes is way up here and everyone else is way down here."

Earlier this year, the BPI announced that Brits are now spending more on digital music than on physical, while the Official Chart Company launched an Official Music Streaming Chart to reflect the changing culture in May.

But the increase in monies is likely thanks in part to Spotify's high profile and highly successful launch into the US market last summer.