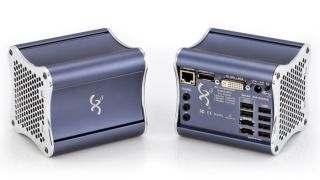 If the heavy hints dropped by Valve Software's Gabe Newell this week are anything to go by, the Steam Box will soon have a release date.

This Linux-powered box is a key part of Valve's strategy to double-down on the advantages of an open-ish ecosystem like Steam on Windows and to breathe life into the innovative but commercially-flagging PC games industry.

It was telling that Newell revealed his company's plans at LinuxCon rather than, say, a gaming event like E3 as the free operating system is such a key part of where Valve sees Steam going over the next few years.

But what makes Linux - never a natural home for gamers - such a good choice for Valve? Is an OS prized by IT neckbeards for its reliability but not noted for its user-friendly nature going to be suitable for plonking in the living room of any random casual gamer?

The first thing to understand about Linux as a games platform is that the OS has changed a lot over the last few years. Hardware detection has mostly put paid to the driver hell that used to dog Linux installs and the main distributions like Ubuntu, now have both slick windowed interfaces and seamless package managers that puts most software installs just a couple of mouse clicks away.

The second is that Linux really is open, at its core. Anyone can take the Linux OS modify it, simplify it or tweak it to better achieve some goal.

Whether that means fine-tuning the kernel at the heart of the OS or creating a streamlined install to fit specific hardware, Linux's flexibility is the reason it now powers much of the web, thousands of embedded systems and - thanks to Android - millions of smartphones.

And it is this openness that seems to appeal to Valve. Steam is sometimes criticised for dominating PC game distribution but, compared to something like the App Store, Steam has relatively low barriers to entry and Valve holds its marketplace in a somewhat looser grip.

It is now a tech industry commonplace that Android is bedevilled by fragmentation because of the hundreds of devices and OS versions that developers must consider. Compared to the PC space, however, Android devs have it easy.

Countless variations in memory, CPU capability, storage capacity and network speeds exist between machines and it is only graphics and audio drivers like Microsoft's Direct X family that have slowed the moving target enough for developers to draw a bead.

What the Steam Box represents, in a sense, is a reference platform for PC gaming. Target this, Valve says, and we will make sure your games will run on it.

Not only that, but they will also run on more powerful desktop and notebook PCs as well as a smattering of older or cheaper boxes. Windows used to have a lock-in on desktop PCs, but Linux is now easy enough to install that switching from Windows is no longer beyond the ken of PC average gamer, particularly those who value performance.

Linux has low hardware requirements compared to something like Windows 8. You could easily drop a thousand pounds on a decent Windows 8 gaming rig, but with its own Linux OS tweaked to maximise performance, the specs of the Steam Box should be lower and consequently more affordable.

What the Steam Box represents, in a sense, is a reference platform for PC gaming. Target this, Valve says, and we will make sure your games will run on it.

Of course, for Linux gaming to take off, developers have to target the platform and that means writing portable code and having the libraries and debugging tools to do so.

Valve has been doing its part to help here. Last year it finished porting its Source engine (which powers games such as Valve's own Half Life 2 and Team Fortress 2 as well as third party titles like the award-winning Dear Esther) to Linux and the company is working on a Linux debugger, based of the suggestions of developers it has been working with.

Valve's journey to Linux isn't just about the hardware and software, however. Valve has been concerned about the way the Windows platform has been changing. In particular, the way Microsoft seems to be trying to reshape the open(ish) PC ecosystem into something more closely resembling Apple's App Store model.

As Newell delicately put it, "We thought there was some bad thinking."

It would be naive to assume that Valve's interests are purely altruistic. A closed Windows app store would be a direct competitor to Steam and it is in the company's interest to encourage a more open model.

"Got an email from microsoft, wanting to help 'certify' Minecraft for Win 8," Notch tweeted late last year, "I told them to stop trying to ruin the PC as an open platform."

Games are one of the missing pieces of the Linux puzzle, one of the last remaining reasons that make switching to it from Windows more difficult.

If Valve's Linux experiment is a success then Microsoft may be given pause for thought, at least in the world of home PCs.