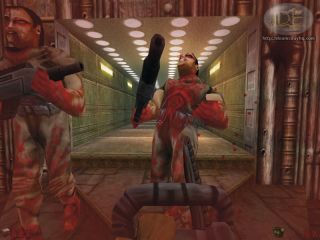 The PC's got a phenomenal, unparalled history as a gaming platform – a good two decades of wonder and weirdness.

The trouble is half it a) looks like ass on high-res displays b) plays like ass due to ancient interfaces c) flat-out won't work on our fancy modern operating systems. Crazy fans to the rescue!

Pretty much any game with even a trace element of cult status retains a fiercely dedicated community striving to keep it alive into infinity.

From the silent devotion of artists making sharp new textures to the modern world-sucks, hyper-defensiveness of oldschool Fallout fans, there's a vast world of tech-curates keeping their cause celebre in perfect working order.

UFO: Enemy Unknown (aka X-COM: UFO Defense) is basically the greatest game ever made, and if you don't agree you're a big dumb poohead. Many others do agree, and are working on a bunch of projects to bring the old strategy/roleplaying/management/alien-shooter kicking and screaming into the 21st century.

UFO 2000 is the current leading light, though unlike its noble forebear, it's solely a multiplayer game. There's also no Geoscape/base mode at present, but the team are actively looking for help creating one – fancy a crack yourself?

On the other hand – online multiplayer in X-COM! This is dream come true territory. It's also worth keeping an eye on another (but as yet unreleased) remake project, Cydonia's Fall.

Sid Meier's turn-based strategy babies Civilization and Colonization have both enjoyed official sequels, but a certain degree of feature creep for the former and compromise for the latter have understandably irked the purists.

Freeciv and Freecol intend to recreate the original games to a tee, only augmented by modern interface values and online multiplayer. While the community-made graphics might lack the cartoony charm of their DOSian predecessors, the remakes are impressively slick and otherwise complete, and both enjoy regular updates. Also: free. It's hard to overstate the importance of that.

Rumours of an official Syndicate remake by Starbreeze, the Chronicles of Riddick chaps, continue to swirl, but let's be honest – given their FPS tendencies, it's highly unlikely it'll be a top-down squad-strategy game like its parent.

Step forward Freesynd, an early but hugely promising attempt to recreate the original satirical, sadistic, dystopic squad game. It's only a couple of levels for now, but it does include almost all the sound effects of the original game, as well as the intro and nostalgia-inducing Bullfrog logos.

Half remake and half sequel, this aims to bring the values of the original two Thief stealth games into the e'erimpressive spooks 'n' shadows of the still robust Doom 3 engine. The team are very careful to avoid copyright infringement, so don't expect to see master tea-leaf Garrett namechecked as such, or any borrowed assets, but it's definitely Thief.

A whole new Thief game, which is probably more exciting than a mere remake. It's very early days for it, but a beta release is due soon (there's a small alpha one already available) and it's already impressively unrecognisable as being Doom 3-based. (Thief: The Dark Mod homepage)

The firm-chinned granddaddy of real-time strategy has never been bested in terms of out and out thematic appeal (three intergalactic houses warring over spice, on a planet infested with giant worms and crazy nomads who drink their own wee. Come on!) but its interface has aged horribly. No group select, no hotkeys, no building rotation…

It's genuinely, tragically a chore to play now. In a strange piece of ironic resonance, three fan remakes are vying for the right to be its heir.

Choose from Dune Legacy, which uses some of the original game's art and sound assets, Dune II: The Sleeper Has Awakened, a ground-up attempt to incorporate modern RTS interface/UI values, and Dune II: The Maker, eight years in the making but still in demo stage.

If you prefer your strategy a little more galactic, then you'll doubtless dig this free open-source space trading/colonisation and combat game 'inspired' (yeah, right) by the venerated Master of Orion series.

Its current v.03 release is deemed "essentially complete", but there are a ton of fixes, polishes and incidental features yet to come. Keep an eye on its progress at freeorion.org.

Railroad management games are thin on the ground in these days of hi-def manshoots, but this java-based remake of Railroad Tycoon might just scratch that itch of yours. It's even got online multiplayer built-in. Give it a whirl.