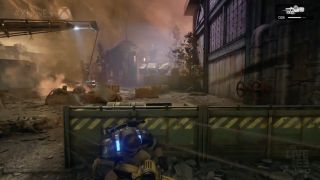 Gears 4 won't be an Xbox One exclusive, as Microsoft is bringing the shooter to PC this October - part of a brand new program letting players cross-purchase games across both platforms.

Xbox Play Anywhere is Microsoft's take on allowing cross-buy for PC and Xbox One - a system not unlike Sony's, which allows players to buy one copy of a PS4 game and get the PS3 or Vita equivalent for free.

Players who buy select titles on Xbox One will instantly receive a copy of the same game on Windows 10 - and vice-versa - with save data, player info, and achievements carrying over from one version to the next.

Starting with Gears 4, the following games have also been announced as coming to Xbox Play Anywhere:

The announcement of Xbox Play Anywhere almost buried another exciting announcement from the Gears team, as The Coalition's Rod Fergusson also announced that PC and Xbox One players won't just be playing the next Gears of War at the same time - but together.

Cross-platform play is coming to Gears 4, pooling PC and Xbox players together for the game's cooperative and competitive modes - getting us extra hyped for what other games could come to Xbox Play Anywhere later this year.