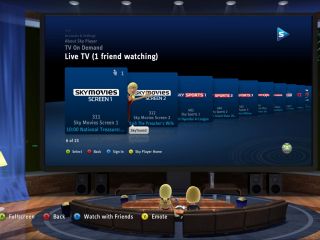 After an aborted launch on Tuesday, Sky and Xbox are hoping that they can finally allow the public onto the eagerly anticipated Sky Player for Xbox 360 24 hours later.

On a day that caused both companies major embarrassment, the roll out of the VOD and streaming television service was suspended because of a problem.

"The service has been suspended due to an unforeseen technical issue." Sky said in a statement.

"Sky Player engineers are hard at work to resolve the problem. We expect to have the full service available on Wednesday."

The Sky Player on Xbox project was announced back in May, but despite nearly six months to get things off the ground the launch did not go as planned.

Comments on TechRadar pointed to the problem early on launch day, with one person suggesting that: 'this is a disaster for Microsoft!'.

And that could get worse unless Microsoft and Sky can get the service up and running this week.