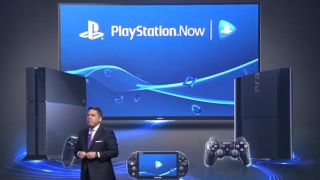 Still mum about a worldwide launch

The PlayStation Now open beta for PS4 begins on July 31 in the US and Canada, Sony announced at its E3 2014 press conference today.

This Gaikai-based video game streaming service will enable gamers to play some of the classic games in PlayStation's library for the first time on Sony's new console.

Yes, just because PS4 isn't officially "backward compatible" doesn't mean you won't be able to enjoy your old games. In fact, the open beta won't stop at the next-gen machine.

Last-generation PS3 and portable PS Vita gamers will share in the PlayStation Now experience "soon after" the open beta comes to PS4. Eventually, select Bravia TVs will get the same treatment.

Games at the ready

Gamers will be able to access to more than 100 PS3 games published by Sony, its partners and indie developers.

We'll have more from the E3 showfloor and give you our updates impressions on PlayStation Now this week in our continuing coverage in Los Angeles.