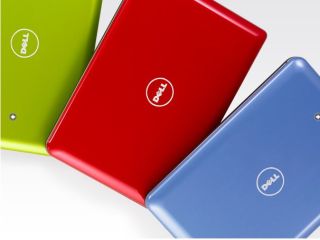 Dell has finally announced the arrival of its Mini 10v netbook, by making it available to buy from the company's website today.

The Mini series of netbooks come in a variety of colours, each sounding like a range of alcopops (Ice Blue, Cherry Red, Jade Green etc), with hard-drive space starting from 160GB and 1GB memory as standard.

Other features include a built-in webcam, Bluetooth connectivity and a choice of Ubuntu or XP operating systems.

The best thing about the compact computer is its price. Starting at just £199, Dell has chosen to put this netbook firmly in the budget bracket.

And it's not just diminutive lappies that have been announced, as Dell has also released the Inspiron 15 – a laptop with 15.6-inch HD display, a 'large' hard drive and DVD burner.

The Inspiron 15 also comes in an array of colours which in another life would act as toilet fresheners – including Flamingo Pink, Pacific Blue and Alpine White.

Prices for this machine start at £299.

While some computer companies are splitting from their desktop ranges faster than Jordan and Peter Andre, Dell is staying true to its towers and have updated this range as well.

The Inspiron 545 slim and mini-tower desktops are said to be perfect for email, Internet, blogging, entertainment and productivity.

Guess what? Colour-wise Dell has gone all crazy with the adjectives again, with names including Plum Purple, Formula Red, Tangerine Orange and Spring Green.

The Inspiron 545 is also available now from Dell, starting at around £299.