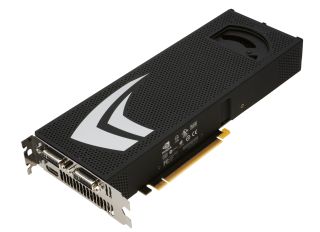 The word you're looking for is 'whoosh'.

The GTX 295 is also SLI-ready (quad), PhysX-ready and CUDA-compatible; capable of turning its processing muscle to Mirror's Edge one day, transcoding your HD videos the next.

As for the GeForce 285, Nvidia claims that it's the "world's most powerful single GPU, delivering 30% faster performance than competing single GPU solutions."

Featuring one GeForce GTX 200 GPU, the GTX 285 brings 240 processor cores to bear on gaming and multimedia tasks. It runs at a clockspeed of 648MHz and packs 1GB of GDDR3 memory.

"Whether it's experiencing a new world of realistic physical motion and massively destructible environments, strapping on your GeForce 3D Vision glasses to game in true stereoscopic 3D, transcoding HD videos in minutes to your portable video player, or rapidly editing digital images using Adobe CS4, the GeForce GTX 295 and GTX 285 do it all with mind blowing performance."

Full details and specifications are available on the Nvidia website.