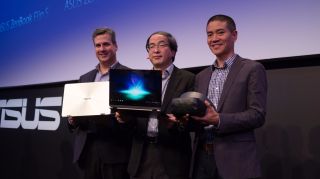 IFA 2017 is in full swing, and Asus has just taken to the stage to show off the Asus ZenBook Flip 14 – the world’s thinnest 2-in-1 laptop.

At just 13.9 mm thick and 1.4kg in weight, this is an incredibly thin and light convertible laptop. Best of all, it also includes a discrete graphics card, which means it can also handle graphically-intensive tasks, such as photo and video editing with ease – something that devices with onboard graphics would struggle with.

As Shawn Yen, Asus Senior Product Director, who announced the ZenBook Flip 14, said, “the major objective of this product is bringing the benefits and versatility of 2-in-1, with the mobility of ultrathin. Marry those two benefits together and empower [users’] needs for graphics.

While the ZenBook Flip 14 is impressively thin and light, it also provides some decent power as well. The aforementioned discrete graphics come courtesy of an Nvidia MX150 chip, which Asus claims will make the Flip 14 four times faster when it comes to video remastering and two and a half times faster for photo editing compared to 2-in-1 devices without discrete graphics.

It also comes with an 8th generation Core i7 quad-core processor, 1TB PCIe SSD for fast data storage and 16GB of DDR4 RAM. An ultra-thin bezel gives the ZenBook Flip 14 a screen-to-body ratio of 80%, which means it has the same footprint as a 13-inch laptop, despite having a 14-inch 1080p display.

Asus also announced the ZenBook Flip 15, which is a 15.6-inch convertible that the company has dubbed “the most powerful Zenbook Flip ever”. This is thanks to an 8th generation Intel Core i7 processor, a 2TB hard drive and Nvidia GTX1050 graphics card, granting the Flip 15 twice the graphical power than its predecessor.

Finally, Asus also announced a more traditional laptop: the incredibly thin and light VivoBook S14. It comes with an 8th generation Intel Core i7 processor, up to 16GB RAM and Nvidia GeForce MX150 graphics, while keeping the weight down to just 1.3kg and with a thickness of 18.8mm.

We’ll be getting hands-on time with all these new devices while at IFA 2017, and we’ll be giving them a thorough testing in our full reviews when they are made available.