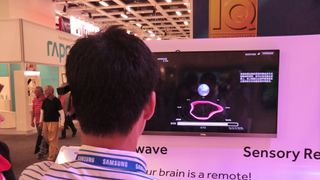 Remote control just too much effort for you? You could soon be controlling your TV with eye movements and brain power, if Chinese TV giant Haier has anything to do with it.

Haier is showing off what it is terming the "TVs of the future" at CES 2013 which, to be fair, given the nature of the showcase most companies could claim without fear of disagreement.

But, the company had us blinking in surprise at its announcement, which inadvertently set up a series link and moved us on one channel.

Yep, Haier tells us that, "amazing but true", you will be using your eyes to change channel (which it already showed off at IFA), or perhaps even just brain waves - with technology developed in partnership with NeuroSky.

Also on offer are voice and gesture controls - but in contrast, they seem frankly dull.

Hidden below the future gazing, Haier also announced that it will be launching its first Ultra HD TVs, with 50-, 65- and 64-inch 4K televisions on the horizon and offering up 3840x2160 resolutions.

They will also feature multiview using 3D glasses - not a new idea but still nifty.

Last, but not least, Haier will show off a 55-inch prototype glasses-free 3D TV at CES, using what the company describes as "unique cylindrical lens technology" to allow viewing from 28 different angles.

We'll check them out (in the future) and report back.