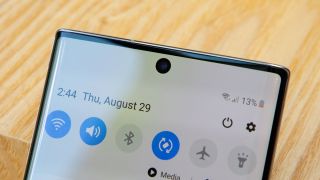 The next step in the journey to removing bezels on smartphones is likely to build cameras into the screen, and it’s a step Samsung might almost be ready to make, as a report suggests that at least one of its 2020 handsets will have an in-screen camera.

That’s according to “industry sources” speaking to The Elec (a South Korean tech news site). The site goes on to speculate that the Samsung Galaxy S11 or Samsung Galaxy Fold 2 might be the first Samsung phone with this feature, but elsewhere we’ve heard that might not be the case.

According to @UniverseIce (a leaker with a good track record) neither of those phones will have an in-screen camera – but they agree that some 2020 Samsung handset will.

So what does that leave us with? Well, the Samsung Galaxy Note 11 is the other obvious option, if such a handset even launches. It’s possible,though, that Samsung won’t use a flagship phone to trial this new tech. It might test the feature out on something lower profile, such as a new Galaxy A handset.

That could make sense, since the technology might initially be imperfect, and it could be a risk putting it in one of the company’s best-selling phones. In any case, once Samsung packs an in-display camera into any widely-available handset it probably won’t be long before other companies follow suit.

Note that Samsung won't necessarily be first. Oppo and Xiaomi, for example, have already shown off in-screen cameras in concept devices, but it will likely take a company like Samsung to make the tech mainstream.