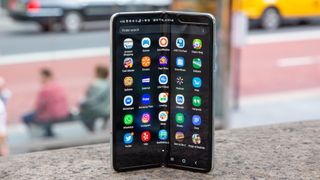 The Galaxy Fold 2 could have a much smaller battery than the original Fold, above (Image credit: Future)

That’s according to Max Weinbach (a writer for XDA Developers), who along with reiterating that Z Flip name, tweeted that the phone would have a 3,300mAh battery.

That’s down from 4,380mAh on the original Galaxy Fold, but before you panic about battery life there are a few things to bear in mind.

The Galaxy Flip Z has a 3300 mAh battery. Along with the Snapdragon 855, this should be pretty ok in everything. About the same battery live as the mid size S10.January 14, 2020

First off, this is obviously just a rumor for now, so it might be wrong. Secondly, the Samsung Galaxy Fold 2 is rumored to have two batteries, and we’d already heard that one of them might be 900mAh. It’s not totally clear from this leak whether that 900mAh would be in addition to the 3,300mAh, or whether the 3,300mAh is the combined value of the two.

We’d guess the latter, but that still might not be a huge problem, as Samsung’s upcoming foldable is also thought to be much smaller than the original Galaxy Fold, so it shouldn’t need as big a battery.

Indeed, Weinbach says to expect similar life to the “mid size S10”, presumably meaning the standard Samsung Galaxy S10, a phone which in our tests reliably lasted around a day. So that wouldn’t be great, but it would be adequate.

In the same tweet, Weinbach says that the Samsung Galaxy Z Flip will use the Snapdragon 855 chipset. This is something we’ve heard before, and would make it a little under-powered in the face of the Samsung Galaxy S11, which is likely to launch at the same time. It should also help ensure the phone is more affordable than the original Fold though.

Samsung was very smart with the Galaxy Z Flip (just got word this is the name.)They are using ultra thin glass and plastic. Samsung will be layering a plastic over the ultra thin glass for extra protection. If it gets scratched, it's only the plastic and not the display.January 14, 2020

In another tweet Weinbach shared a more promising claim, saying that the phone will use the previously-rumored Ultra Thin Glass, which is tough in its own right, but that there would be a layer of plastic on top, meaning that if you scratch the screen, it will only be the plastic that gets scratched.

This runs the risk of looking or feeling less ‘premium’ than a pure glass screen, but in a phone this expensive it’s probably more important that it’s built to last. We should find out whether these claims are true or not soon, as the Galaxy Fold 2 is likely to land on February 11.