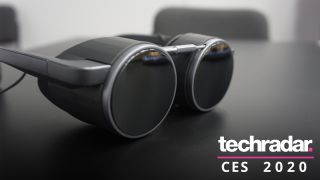 In an electronics industry now full of VR headsets and AR smart glasses, it’s not often we’re surprised by a new entry into the fray – but Panasonic’s new take on a VR visor has certainly grabbed our attention, and we managed to spend some time demo-ing the prototype at the CES 2020 expo as they were unveiled for the first time.

What’s so exciting about another piece of VR headgear? The untitled Panasonic prototype takes the VR eye display found in the likes of the Oculus Go or HTC Vive, and melds it with a relatively small spectacles design.

Joseph E Cates, Group Manager at Panasonic Hollywood Laboratory, stresses that the VR glasses are “still a prototype, though we obviously want to take this to the commercial. This may be approximately the design that comes to market, or possibly similar to the final form, but we can’t say for sure.”

He adds, “We wanted to show that it is possible to create a lightweight, stylish headset with very high-quality video.”

There’s no telling what the end result might look like, but we’re assured Panasonic is pushing it for eventual release, and if they manage to get such a small piece of hardware running VR competently – with a compact one-inch OLED display for each eye – it could well gain some devout followers.

Smart glasses are quite a hard market to crack, what with the geeky design of the forerunner Google Glass having given the technology something of a bad rep – while newer and more aesthetically-minded models like the Snapchat Spectacles or Magic Leap One have yet to really cash in with consumers (even if the long-awaited Apple AR glasses could change that).

The VR angle is interesting, though, and we’re told that Panasonic is considering a variety of options when it comes to forward-facing cameras to build in AR support as well, or 5G connectivity – hinting at a flexible, multi-purpose device that doesn’t require closing off huge sections of your face and head from the outside world.

The audio brand Technics – owned by Panasonic – is providing the sound, too: we tried on a model with wired in-ear headphones for more private use, and one with clip-on speakers more suited to public / corporate use.

So, what's the problem?

This is a prototype model, so any current issues will likely be ironed out by the time it gets to market – not that we know when that is. Panasonic was reticent to give a rough release window, and we get the feeling this isn’t a product being rushed through production too quickly for proper quality control.

The main issue right now is the weight distribution. That’s part of the reason VR headsets are, you know, headsets: VR displays tend to weigh down the front of the head, and you need something counter-balancing them to stop them falling off your face, which is exactly what happened here. They kept sliding away from our eyes, meaning the images went out of focus, thus making immersion difficult.

The problem didn't feel insurmountable, but there's a clear weight problem if you're constantly having to push the VR glasses up on your nose – and expensive hardware at risk of hitting the floor doesn't bode that well either.

We’re told that the glasses would likely need to be connected to a processor or battery pack kept on our person, though – similar to the Magic Leap AR headset, which requires you to clip a small, wired device to the outside of your pocket during use.

We don’t expect Panasonic’s will be hugely powerful, despite the 4K resolution – just given the restrictions of space – so it likely won’t be much for VR gaming.

The model we tried out was rigged up to a computer with some quite garish wires, and even then the 360-degree videos we experienced suffered from a lot of banding in large sections of sky, while struggling to display with heat shimmers without warping objects and buildings in the distance. (If we end up having to link the glasses up to a high-spec PC at home, too, it would really defeat the point of such a portable form factor.)

It was nowhere near the capabilities of VR headsets like the crisp HP Reverb, though this is obviously still an in-development piece of hardware.

Panasonic is pitching these VR glasses for a “pyramid of consumer applications [and] business and training applications”, with the expectation that they’ll be offered at the top-end of the consumer market – meaning these won’t be cheap pick-up-and-play devices. But it still could undercut the premium Magic Leap AR headset, which retails for a costly $2,295 (about £1,731 or AU$3,073).

We were certainly intrigued by what Panasonic is aiming for, though the VR glasses’ success (or lack of) may be down to how successfully it can straddle all those worlds – and compete with the other, well-funded players in the VR/AR market.