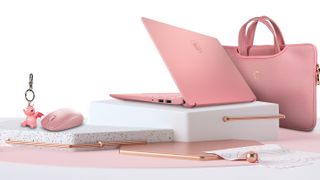 For the longest time, all the best laptops and Ultrabooks have all kind of looked the same. Sure, there are different form factors and shapes but they've all had one thing in common: they're all drab as hell. However, with the recent release of the MSI Prestige 14 Rose Pink Edition, an unapologetically pink laptop with serious horsepower, and the Razer Blade 15's Quartz color option, we might be on the precipice of change.

I mean, I use a 13-inch MacBook Pro as my personal laptop, but it's not because I'm in love with the aesthetic or anything. In fact, in order to spice up that laptop, I've covered it in copious stickers so I never have to look at that boring design.

And, well, I just shouldn't have to do that. We're living in the golden age of ~**the aesthetic**~ and we should be able to express ourselves through the color of the laptop we choose to occupy our desks every day.

Sorry Jony Ive, but the MacBook Pro is boring

I kind of just need to rip off the band-aid right away on this one, but if you walk into a room and everyone is using a MacBook Pro - which is also just called going to a coffee shop in Manhattan - every single one looks pretty much the same.

You just enter into this sea of gray, as both the Space Grey and the Silver are pretty similar, at least at a glance in a crowded room. It's true that the MacBook Air comes in the Gold color option, and while it's very aesthetically pleasing, it's still just using a fanless 8th-generation Amber Lake processor.

And I get it: some folks really are into that faceless corporate design that is exemplified by the MacBook Pro. But I don't think everyone - even professionals - is into that kind of aesthetic. We need something more.

The march of the pink laptops

When I got a press release announcing the MSI Prestige 14 in all its pink glory with a pink dragon keychain, a laptop case and a pink mouse, I was immediately sold on it. Finally, a laptop with serious horsepower, targeted at creatives - and it doesn't look like it would stifle creativity with the sheer blandness of its design.

And that's not even the first high-end laptop that's embraced the pink. One of the best things I saw at IFA 2019 was a pink Razer Blade Stealth. That svelte chassis looked phenomenal in its Quartz color option. Little did I know when I first laid eyes on it, however, that the machine I saw was exclusively the version with integrated graphics - and the version with the GTX 1650 won't come in that vibrant hue.

That's a damn shame, and Razer still hasn't updated its thin and light "gaming laptop" that, unlike the original Razer Blade Stealth, can actually game with the Quartz color option.

There seems to be this incredibly toxic trend in electronics in general where people are essentially forced to choose between performance and style. But why should we choose? I want both, and I know I'm not alone.

I don't even want to hear that unique colors are unprofessional, especially after the HP Elite Dragonfly hit the streets with its amazing Iridescent 'dragonfly blue' finish. HP could have easily launched a laptop with the pro features it offers and sold it to many traveling businesspeople without much issue.

It's a laptop that offers excellent performance, is so lightweight I was constantly in fear that I left it in the office, and comes with a metric ton of security features which will make it the favorite of IT departments worldwide. But I don't think that's why it's one of the most celebrated laptops on the market right now - I think the design is what really takes it over the edge.

Look, right now I have something like 6 laptops on my desk - this is my life now - and there are only two laptops that I can glance over and identify immediately: the Alienware m15 and the HP Elite Dragonfly.

You know what the common thread between these two laptops is? They both have elegant and stand-out designs that make them visually appealing and unique, without sacrificing on high-end performance.

I'll admit that this is a huge part of why the HP Elite Dragonfly is currently TechRadar's pick for the best laptop on the market. Sure it's expensive, but not only do the security features make it less likely that your computing life will be ruined by haplessly surfing the web, but I think it's an excellent starting point that we hope other computing manufacturers will follow in the future.

All I'm saying is that I hope devices like the MSI Prestige 14 Rose Pink and the Quartz Razer Blade are successful. I've seen too many laptops announced with exciting color options that never make it to market out of fear they won't sell. So I guess I've got a request for you, dear reader: if you want a pink laptop, get one. Buy one and rock that shit, and we'll start seeing more super aesthetic laptops in the future - a future I desperately want to live in.