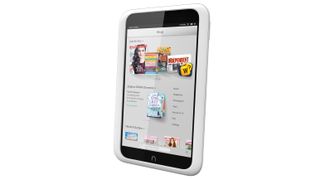 Fancy some Nookie? Now available in the UK

You can now pick up Barnes & Noble's own budget tablet propositions from UK stores, with the 7-inch Nook HD and 9-inch Nook HD+ taking the fight to the lower end of the market.

The Nook HD weighs in at £159 for the 8GB model and £189 for the 16GB version and features a 1.3GHz dual-core processor, 7-inch 1440 x 900 display and expandable storage via microSD slot. Colour options include romantically-titled 'smoke' (grey) and 'snow' (white).

The Nook HD+ is the larger of the two models, coming with a 9-inch screen and weighing 515g in the hand, compared to its younger sibling's 315g. The HD+ boasts a Full HD display, 1.5GHz dual-core processor and, again, expandable memory through microSD slot.

Both Nooks come with Bluetooth and WiFi, as well as integrated access to B&N's online Nook Store where you can download a host of books, newspapers and magazines.

The Nook Video store will also be available from December, giving owners access to films and TV shows.

You can pick up a Nook HD or Nook HD+ in store and online from selected retailers.