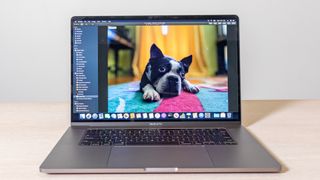 Apple’s new MacBook Pro 16-inch has had the shine taken off it somewhat, at least in some cases – that's going by reports of problems about the laptop’s speakers making popping noises, and issues with that fancy new larger display.

Apple Insider highlighted the alleged flaw on the audio front, whereby some owners are reporting that popping or clicking sounds are emanating from the speakers of their fancy new MacBook Pro 16-inch.

This has echoes of earlier problems with Apple’s laptops, and you may recall complaints about crackling speakers with the MacBook Pro 2018 (which affected both 13-inch and 15-inch models). Similar glitches were reported in some cases with 2017 and 2016 versions of Apple’s MacBook Pro, as noted in that previous article.

In the problem’s latest incarnation, it reportedly occurs when playing audio (or a video with sound), and if you stop playback, then skip to another part – or close the media app – you get a strange popping or clicking noise (which can vary in volume). And that’s not particularly pleasant, especially when you remember how much this seriously premium piece of hardware costs.

As in previous cases when this gremlin emerged, there doesn’t seem to be any real root cause or consistency as to when this problem manifests, or how widespread it might be, although it would appear there aren’t too many sufferers (yet).

That said, it’s certainly affecting some models, and there are various reports on Apple’s support forums, and several Reddit threads. There’s also video footage floating about on YouTube, and allegedly even laptops which are on display in Apple’s retail outlets exhibiting the popping problem.

There are various theories about what might cause the issue, including that it’s related to Final Cut Pro X 10.4.7 (although the glitch is happening outside of this app, too, as noted).

Regarding possible workarounds, suggestions include firing up a YouTube video in a browser tab, then navigating away to another page, which supposedly gets rid of the popping glitch – at least temporarily. And opening QuickTime player, then selecting File > New Audio Recording allegedly cures the issue, too (nothing has to be recorded – you just need to keep the app running and minimized, says one denizen of Reddit).

Apple is apparently investigating whether Final Cut Pro X is causing this glitch, and another Reddit poster indicated Apple knows about this issue, and is working on a software fix.

So perhaps we can expect a patch in the pipeline before too long – either for Final Cut Pro X, macOS, or possibly both.

Ghost in the MacBook

As for the issue with the new super-sized MacBook Pro’s display, that reportedly involves an unpleasant ghosting glitch.

A Reddit post observes: “When using the launch pad and moving between apps, the display seems to have ghosting – it’s not smoothly transitioning between each page of apps. I’ve noticed the same thing for stuff like text when scrolling, it’s blurry until you stop still. Has anyone else noticed this at all? I am using the new 16" MacBook Pro as is.”

Another person then chimes in: “I’ve noticed this. It’s very obvious especially when I put the 16 in. MacBook Pro next to my 15 in. mid-2015 one. I’m trying to avoid a trip to the Apple Store, but I may have to make one to see if I just got unlucky or if this is endemic to the model.”

Some folks have pointed out that anyone suffering this issue should ensure the display is set at 60Hz (because the refresh rate can now be changed in display settings), but the people complaining are running at 60Hz.

Some have even suggested that the new screen on the MacBook Pro 16-inch itself could be to blame. A reply on this Mac Rumors forum post theorizes: “The 16" is running a new panel that supports multiple refresh rates. The ghosting is definitely worse than previous years. Whether or not it bothers you depends on your sensitivity.”

We didn’t notice any problems with the display when we tested the MacBook Pro 16-inch in our extensive review, mind, and we raved about the screen being beautifully crisp, vibrant and sharp. We also found that this laptop’s speakers were superb, too.

Apple has yet to officially comment on either ‘popgate’ or ‘ghostgate’ (ahem), but judging from the way some of these complaints are spreading, that may change soon. But certainly the hope for those affected is that these problems will be curable via simple software fixes, as opposed to being hardware issues.

Apple has, however, admitted problems with some entry-level models of the MacBook Pro 13-inch (2019) unexpectedly shutting down – and we’ve highlighted the advice on fixing these issues here.