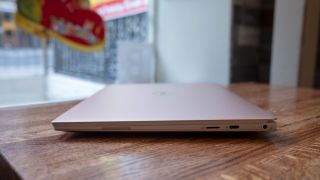 In a move which, at least to some extent, seems to be running interference with AMD’s recently released (and well-received) fresh APUs, Intel has unveiled a single new 8th-gen Core i3 processor aimed at ultraportable laptops and 2-in-1s.

You get integrated graphics in the form of Intel’s UHD Graphics 620 (with a base frequency of 300MHz, maximum of 1GHz), and the chip has a TDP of 15W. It supports DDR4-2400 system memory.

The new Core i3 pretty much sticks along the same lines as its Kaby Lake predecessor, then, with the main difference being the ability to boost up to a faster speed (the old one topped out at 2.7GHz), with support for slightly faster system RAM. And of course it also features the benefits of the new architecture.

Intel boasts that the chip represents a “performance jump over the previous generation” and offers “an overall experience that is optimized for speed and simplicity.”

The company notes that this model rounds off its initial portfolio of 8th-gen mobile processors (first launched last August), and that we’ll see new notebooks from manufacturers using the Core i3-8130U before long.