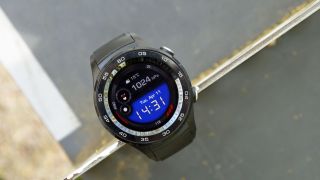 All in all, 2017 wasn't the greatest of years for smartwatches, but as 2018 kicks off we're already seeing manufacturers looking to innovate with their devices, including Huawei, which has plans to bring out a new watch with touch-sensitive bezels.

Or at least that's what a patent spotted by LetsGoDigital would have us believe. The documents filed with the World Intellectual Property Organization (WIPO) show a smartwatch bezel divided up into eight sections, each of which can be tapped to launch some kind of action on the wearable.

It sounds like a neat enough idea to us, and could be an interesting twist on the rotating bezel input options developed by the likes of Samsung on its smartwatches. With limited space on the watch face itself, getting any of the controls moved out to the edges has to be beneficial from a user point of view.

The patent shows how swipes and taps could be combined to cover all kinds of functions, from browsing through menus to launching specific apps, and maybe calling up some kind of digital assistant (which would presumably be Google Assistant in Huawei's case).

As ever with patent applications, these documents don't necessarily prove that a smartwatch with a touch-sensitive bezel is on the way from Huawei, just that the company is thinking in that direction – but we'd say it's a smart enough idea to find its way into a Huawei smartwatch at some point in 2018.

Huawei has launched two very respectable Android Wear smartwatches so far, the most recent of which was unveiled at Mobile World Congress last February. We'll be keeping our eyes open at MWC 2018 in just over a month to see if Huawei has anything new to show off.