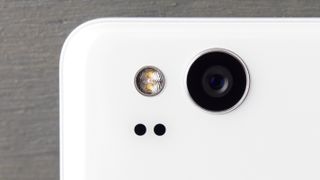 While we’ve already had plenty of chances to check out the larger Google Pixel 3 XL in the slew of leaks over the last few months, we’re finally seeing what is very likely to be Google’s smaller Pixel 3 flagship.

The leaked photos and screenshots come from an anonymous Reddit user whose account has since been deleted, so the veracity of the leaks should be taken with a pinch of salt.

However, given the current volume of new Pixel leaks and rumors, there's a strong possibility we’ve been given a fairly accurate description of the smaller handset.

For instance, /r/GooglePixel moderator Racer_77 stated in the thread that “based on all other leaks and renders seen so far, I personally have enough confidence to say that this is likely the Pixel 3.”

The three images the Reddit user has taken of the handset give us a pretty good look at the upcoming Pixel 3. The rear of the handset closely resembles the current Pixel 2 and Pixel 2 XL design with their single-lens camera and fingerprint scanner, albeit with a curved boundary between the glass and aluminum sections.

Similarly, the side of the phone isn’t anything too exciting or surprising – with a volume rocker and power button as we’ve come to expect and a slightly more rounded side profile overall.

The handset’s screen looks a whole lot like the Pixel 2 XL but smaller, with much thinner bezels than the existing Google Pixel 2, and rounded edges on the display that match the curvature of the handset itself, just like the 2 XL.

While it’s a touch difficult to make out, the image of the phone’s face also appears to be sporting two front-facing cameras. This is supported by the specification screenshots which list two 8MP cameras – one with a dual aperture of f/1.8 and f/2.2, and the other with f/1.8.

It’s what’s inside that counts

If this leak does indeed prove accurate, the screengrabs show off a great deal of nitty-gritty when it comes to the inner-workings of Google’s next flagship.

Although the slimmer bezels allow for a bigger screen, the resolution of 1,080 x 2,160 maintains the same 440ppi density that the Pixel 2 had. As mentioned before, the specs also seem to confirm a dual front-facing camera, which has previously been speculated to support 3D facial recognition.

While we can't know for sure whether this is in fact a legitimate Pixel 3 and if the specs in the screenshots are accurate, the chances are looking pretty good at this point. For complete peace of mind, however, we'll have to wait for the likely October announcement from Google itself.