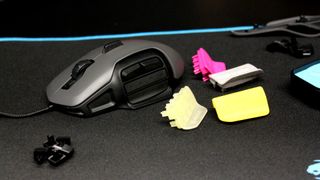 Gaming mice with more buttons than a sweater shop can be useful for MMO titles, but for other genres all those bits of plastic can prove distracting and even get you into trouble when you accidentally lob a grenade at your team when reaching for a knife.

Roccat thinks it has the answer in its new modular Nyth gaming mouse, which places 12 buttons along its left-hand side in a classic MMO mouse layout. The twist is that you can pop out and rearrange them however you like, allowing for a potential 36 different configurations.

Launched at Gamescom 2015 and priced at €120 (around £84/$131/AUS$178), it comes with two different button sizes - a longer and shorter one - in addition to a grip part that covers up one of its three rows of holes. By combining all three, you could easily recreate a classic two-button FPS layout, for example.

Covering the bottom two rows with grips and using the two biggest button sizes on the upper row would provide traditional forward and back buttons that could be mapped to a knife or projectile.

Mapping is taken care of using Roccat's new Swarm driver, which the company tells us is now the default software for configuring all of its peripherals. This puts an end to downloading individual drivers for separate products, and while it's not backwards compatible across Roccat's entire range, the company says that it'll be implemented across its more popular products such as its Tyan Mouse and Kone XTD series.

Roccat also has a mobile app in the works for Android, iOS or iPhone that will let you alter DPI, RGB lighting colours and other settings on-the-fly.

The Nyth's customisability makes it an interesting prospect for owners of 3D printers, who will soon be able to download "approved" button set designs from an upcoming 3D Printing section of Roccat's website.

The approved bit is important because, although you'll be able to use your own button designs for use with the Nyth, its low fault tolerance means an inaccurate piece could break your mouse's click functionality by being just 2-10th of a millimetre out.

Roccat has also given us a preview of its upcoming Sova gaming board, which is essentially a keyboard, a wrist rest and a mouse pad moulded into a plank of plastic.

Aimed primarily at PC gamers, it sits on your lap and provides a sturdy surface that goes some way to recreating the feeling of sitting at a desk. With the rise of Steam Machines and Microsoft's promise to eventually let Windows 10 users stream games to Xbox One consoles, Roccat is looking to appeal to couch dwellers who may be considering taking their entertainment into the living room.

There are wired and wireless versions of it the works, with the latter apparently proving the bigger challenge due to charging and battery life issues.

The wired version still has some way to go too, with Roccat telling us that it plans to replace the magnet-attached cable tidy mechanism on its current mock-up model with something a bit more elegant.

The Sova totes Windows and Android compatibility and features a USB port to connect a headset or charge a smartphone. Moreover, Roccat intends to offer it in membrane or mechanical keyboard versions, so it's possible that it the latter might feature the carious Cherry MX switches used in its Ryos-series keyboards.

Though official pricing is a long way off, we're told that the membrane version could cost in the region of €150 (around £104, or AUS$222), with the mechanical one priced a little higher.

The company has set its sights on launching the wired version of the Sova in the first quarter of 2016, with the wireless version coming sometime after.