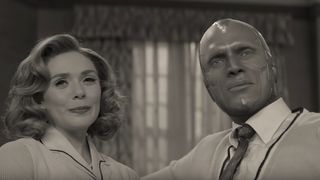 A Super Bowl Sunday trailer gave us our first look at the Marvel TV shows coming to Disney Plus starting in 2020, and it's a surprisingly dense trailer considering it's only half a minute long.

We get a first look at The Falcon and the Winter Soldier – the Captain America-themed spin-off that supposedly lands in August, WandaVision, and Loki, with enough Easter Eggs and clues about their direction that we're left with plenty of things to think about.

Below, we've analyzed the 30-second teaser for clues on where each series is going. First of all, though, here's the teaser trailer in case you haven't seen it yet:

Training with the shield

We know Sam Wilson isn't Captain America at the beginning of this series, even though he took the shield from Steve Rogers at the climax of Avengers Endgame. This show, though, will focus on what he did with that shield next, and the responsibility Wilson has in taking it from Cap – right now, as the name of the show and brief shots of Wilson in costume suggest, he's still Falcon.

In this trailer, we see Wilson training with the shield in a remote location (it doesn't appear to be Hawkeye's farmhouse, based on the color scheme of the house, in case you were wondering). We see Bucky at the end of the trailer in the same place, with Sam. By the end of the season, we'll surely see Sam ready to take on the Captain America role on a full-time basis.

Who is this new Captain America?

So who's the patriotic figure above, jogging out to a football game in what looks like Captain America's costume? That's likely Wyatt Russell's John Walker, known as Super Patriot and U.S.Agent in Marvel's comics, a kind of government-endorsed version of Cap. We feel fairly certain he'll end up being a key villain of the season; a showdown for the Captain America mantle feels like it's on the cards.

The return of Helmut Zemo

The Falcon and the Winter Soldier brings back one of the better MCU villains: Helmut Zemo (Daniel Bruhl) from Captain America: Civil War, who was more of a psychological enemy than a typical CG punching bag, using Bucky's brainwashing to turn the Winter Soldier against the other Avengers.

Here, we see Bucky put a gun to his enemy's head – even with his long rehabilitation in Wakanda, we still can't be completely sure that Bucky won't be controlled by Zemo with trigger words like 'Traincar' and 'Homecoming'.

We knew there'd be at least a sitcom riff to WandaVision, and in this trailer we actually see a pastiche of a few different comedy styles from across American TV history. These shots of idyllic suburban life are partly inspired by the Vision comic released in 2015, written by Tom King and illustrated by Gabriel Walta, which featured similar imagery of Vision dressed as a dad.

This series, though, is focused on Wanda, and almost looks Pleasantville-esque in its contrast of this sitcom-styled world and whatever Wanda's real-life situation is. Wanda's powers in the comics enable her to reshape the reality around her – it's possible this show is secretly about her grieving process towards Vision's death in Avengers: Infinity War, and maybe even her brother's. We'll have to wait and see.

The shot above, of course, is our first-ever look at the original costume design of the Scarlet Witch character in live action.

Loki and the Time Variance Authority

As pointed out by MCU Direct, the one shot you see of Loki in this trailer has him in what appears to be a prisoner's uniform of sorts, marked with the letters 'TVA'. This feels like a very deliberate Easter Egg on the part of Marvel.

In short, the TVA, or Time Variance Authority, exists to watch the multiverse and keep timelines free of major disruption. You might remember that in Avengers Endgame, the Loki of 2012 stole the Tesseract, jumped through a portal and disappeared.

This series will reportedly explore Loki's hand in causing major events across history, and we know Loki will tie in to the upcoming Doctor Strange in the Multiverse of Madness, so it makes sense the TVA would want to catch up with him.

In addition to these shows, Marvel has Hawkeye, She-Hulk, Ms Marvel and Moon Knight TV shows in the works. They all look like movies in terms of their production values, and a serious step up from previous small-screen Marvel fare.