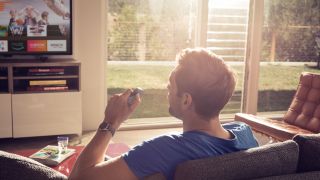 Amazon is having a huge sale on its Fire TV range, with savings of up to $85 to be had on the brand's streaming devices – ideal if you're looking to upgrade your home cinema setup. (Not in the US? Scroll down for the best Amazon Fire TV prices in your region.)

First up is the Amazon Fire TV Stick. This second-gen dongle plugs into the HDMI port at the back of your TV, bringing with it apps including Netflix, YouTube, Apple TV, Spotify and Prime Video.

Reduced from $40 to $25, the Fire TV Stick comes with an Alexa-powered voice remote, allowing you search for your favorite shows and streaming platforms with your voice alone.

Also reduced is the Fire TV Stick 4K, which is (you guessed it) capable of 4K HDR playback, and boasts a number of new specs and features, including the ability to combine with Echo speakers wirelessly to create a home cinema system.

Fire TV Stick 4K with Alexa Voice Remote: $24.99 at Amazon
Stream your favorite content in 4K resolution with HDR too with the 4K Fire TV Stick. Again, we saw cheaper deals over Cyber Monday, but a $15 discount is never to be sniffed at when you're getting 4K streaming in return.
View Deal

Amazon has also cut the price of the 2019 Fire TV Cube from $119.99 to $99.99. While that's not a huge discount, the upgraded Cube is, by far, our favorite Amazon streaming device, thanks to Dolby Vision support, 4K playback, and voice control.

Last but not least, is the Amazon Fire TV Recast. This OTA DVR (over-the-air digital video recorder) works alongside other Fire TV devices, allowing you to record live TV to watch later.

Usually $230, the price has been cut to $145 – that's a saving of $85, and the biggest discount of the lot. As with all these deals, it's not the cheapest price we've ever seen, but it's still a good discount.

All-new Fire TV Cube: $99.99 at Amazon
Save $20 on the Amazon Fire TV Cube, a hands-free 4K streaming player that's Alexa compatible. Use your voice to play music, ask questions and control your smart home devices without turning on your TV.View Deal

Amazon Fire TV Recast: $229.99 $144.99 at Amazon
This over-the-air DVR lets you record two live shows at one time, feeding them to you via tour Fire TV streaming device, Fire TV Edition flatscreen, or Echo Show device – and with $85 off, it's a bargain.View Deal

Not in the US? Check out the best Amazon Fire TV prices in your region below: