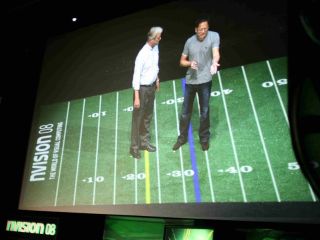 Han stole the show at the opening keynote speech of nVision

In spite of Nvidia CEO Jen-Hsun Huang's comment about 'pulling a Tom Cruise,' it was scientist Jeff Han who managed the most convincing impression of the diddy scientologist. Emulating Cruise's techno-ballet Minority Report, Han stole the show at the opening keynote speech of

Han, a self-confessed 'hardcore graphics guy,' is one of the main developers behind the interface-free, touch-driven computer screen. His company, Perceptive Pixel, was founded as an offshoot of the NYU Courant Institute of Mathematical Sciences at which he was a research scientist.

Speaking on stage with Jen-Hsun, he declared that with the exponential growth in power of the modern computer it was actually the forty year old mouse-driven interface that is now actually holding us back.

Mouse 'is the bottleneck'

"The graphics at the time couldn't actually keep up with the two degrees of freedom. It's amazing what we can do now in real time. But what if we can start using more than one person on a machine, what if we start using larger, mega-pixel display? And in essence the mouse is actually now becoming the bottleneck."

With a simple touch of the 100-inch screen that had previously been a pretty, but mostly irrelevant backdrop, Han brought it to life. With the large panel (Jeff Han goes on to describe 30-inch displays as small later in the presentation) two people can be working together at the same time on the same computer surface.

"The first thing we realised is that you can't use the same icons as a normal desktop," Han said, executing a deft swirl of the finger upon the pressure senstive surface. "I don't want to keep going down to the lower left hand part of the screen to press the 'Start' button to invoke a new command."

The loop gesture is very reminiscent of the spell-casting gestures of the old Peter Molyneaux game, Black and White. By executing this loop on the panel you can bring up the menu and from there access any part of the computer that you normally would from your desktop or keyboard. Indeed the virtual keyboard is nestled in there as Han demonstrated when Jen-Hsun found it impossible to locate his home town on his side of the map screen.

The impressive thing about this interface is the tactile sense of it. Windows are opened whereever the touch is felt, there's no spatial conformity to it, no forced parallel clipping. Indeed you can spin and manipulate the windows as you wish, with just enough momentum to make to make them seem organically created. It's very much like throwing down scraps of paper onto a desk and projecting anything you want on to them.

High-end for the moment

"It's possible because we're actually now tapping into the graphics hardware, the graphics are only now there. There's a lot of latent potential that graphics have now that we're not tapping into yet because of the existing input devices. This is what we've been working on."

Han freely admits this is all very high-end stuff at the moment, but the trickle-down effect means that it might not be long before we can see this potential on the huumble desktop computer. "The technology cureves have become shallower and shallower. We're going to see a much more rapid trickle-down of thois technology. I can see it happening very soon."

We hope he's right, and to be honest we'd believe anything this guy said after such a demo and so would half the audience after the rapturous applause his presence on stage garnered.

Check out the Perceptive Pixel homepage for a Han-powered demonstration of the technology at www.perceptivepixel.com. And remember everything you see here is actually happening on screen. Do want.