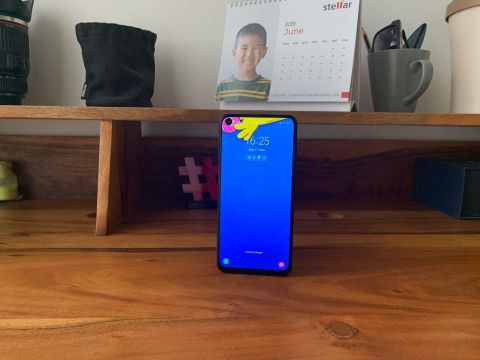 Samsung M40 is a well balanced phone, but only if do not consider the price. At Rs 19,990, it's own sibling M30 undercuts the M40 to offer a better overall value. It offers respectable power, good rear cameras and a nice display but there are elements that leave us asking for more at its price.

Samsung has added another member to its millennial centric M-series - the Galaxy M40. The new model was launched in India last week, and the big deal about it is it's 'infinity-O' display, which is essentially the punch-hole cutout on the screen to place the front camera without needing a notch.

With this, Samsung now has a complete set of new phones ranging from Rs 8K to 20K, which has been its strategy from the older days, but much like its key competitor Xiaomi, the new series offers more value compared to the older J-series and On-series handsets. The new line-up is a complete refresh where the M40 brings a new triple camera, punch-hole front camera and a new way to allow audio through the display, but it still lags behind the M30 in some areas which makes it a debatable buy.

To see if the M40 is a step up at that price, we used it for more than ten days to be sure if it's the go-to option under 20K price segment.

Galaxy M40 is priced at INR 19,990. It goes on sale starting noon of June 18. It will be available for sale on Amazon.in and on Samsung’s own online shop for sale in Midnight Blue and Seawater Blue gradient colours.

With what it has to offer, it competes against the likes of Redmi Note 7 Pro, Asus Max Pro M2 and similar, which are price slightly lower at Galaxy M30's range.

The M40 comes packed in a polycarbonate body. However, the back has an entirely different gradient pattern where the curved sides have a slightly lighter shade of blue, and the flat part is in deep blue. Note that the seawater blue variant comes with is more on the white and light blue hues, while we reviewed the midnight blue variant.

The corners and the Samsung logo in the center have a Galaxy A50 like rainbow reflection, which looks beautiful. The rim is also painted in blue and is made of aluminum, and the shiny corners make it resemble as the back panel, and the side is a single part.

The rear panel is smooth to touch. The triple camera array on the back resides in a module on the top right corner with an accented silver ring over the middle sensor.

The real differentiator in the design here is its front where there's a punch-hole for the front camera. It's an all-screen phone like the Galaxy SE or the Galaxy S10 but with a hole on the left corner of the screen instead of right.

Except for a slightly thicker chin, the other bezels are very slim, which increases the screen to body ratio. So you get the maximum screen and minimum obstruction unless the punch-hole is one for you.

Despite its large 6.3-inch display, the phone still feels relatively compact in hand and has a decent build overall. One must note that the polycarbonate material on the back is highly prone to scratches, especially, the corners might lose their shine if you're not a good caretaker of your phone. With that dominant glass front, it is always advised to use a back case for extra protection.

The Samsung Galaxy M40 has a 6.3-inch TFT LCD with full HD+ resolution. As we mentioned, this setting allows the M40 to achieve a high screen ration of around 90%. Samsung is known for being generous with its AMOLED displays on its budget phones, but the M40 looks like an exception here. The M40 uses the same LCD panel used on the M20 for a reason not known. We assume that's a move to adjusts the cost to accommodate other features like camera and design.

The display performance, however, is pretty impressive. The viewing angles are, and with maximum brightness, the M40 has remarkable sunlight legibility. We would not say that the colors and blacks are as impactful as the AMOLED panel on the M30, but it still makes for a good display for movie-watching or general usage.

Another plus point is that the M40 is Widevine L1 certified, meaning you can stream HD content on the phone from Netflix, Amazon Prime, and the similar up to the display's resolution. Samsung is emphasizing on the fact as many mainstream manufacturers like Xiaomi, Honor, Realme have been pointed out for not having the given certification on their phones.

The Samsung Galaxy M40 features a triple-camera on the back, which looks more capable compared to its siblings. It has a 32MP primary shooter with f/1.7 aperture along with an 8MP ultra-wide camera with 123-degree field-of-view and a 5MP sensor for depth mapping. There's 16MP front camera drilled in the punch-hole.

Samsung's scene recognition algorithm powers the camera. Which means it optimizes the shots after judging a scene. A quite old feature, but makes photography slightly easier for newbies.

Its camera app has all the basic stuff like slow-motion, hyperlapse, 4K videos, live focus (Samsung's version of portrait mode) and so on.

As with most other phones in the range, the primary 32MP camera impresses the most in bright natural light but struggles in tricky lighting conditions. If compared to the competing phones like the Redmi Note 7 Pro or even the Mi A2, this one is slightly behind in gathering details in low-light shots.

Photography enthusiasts can play with the wide-angle to get creative and capture unconventional shots, but don't expect it to capture anything like the S10 or even the OnePlus 7 Pro. An issue that's constant on both the M30 and M40's wide-angle camera is that it fails in detail retention.

Regular pictures are very Samsung-ish. By that we mean they're well saturated, look good enough for social media posts, but lack detail and clarity. But what it does well is the portraits with impressive edge detection. You control over the background blur of the image and daylight portraits look good. Depth-sensing, in general, is quite remarkable on the M40.

What's really surprising is that M40, despite being a millenial-focused device, has a sub-par front camera and image optimisation. If your'e spending 20K on a phone then it's hard to expect a depressing front camera, especially when it's made for young millenials.

The major issue with the camera is its software processing. Forced beautification is what I call this issue. There may be individuals who like their skin smoothened and whiter but what if someone needs a real picture? Below is a cropped out picture of myself with beauty mode off and ample of natural light.

Apart from this, the front camera is also sub-par at handling light. Which means if there's sun or a light source behind you, the camera struggles to autofocus and clicks overexposed selfies.

Samsung Galaxy M40 is powered by Snapdragon 675 chipset, which is a reliable option for anything below Rs 20k. It has 6GB of RAM and 128GB internal storage. The Redmi Note 7 Pro also features the same chipset at a slightly lower price.

With that configuration, the performance of the M40 has been respectable. On moderate use, the Snapdragon 675 can power the phone through most tasks; however, you cannot expect an extreme level of multitasking. On the new unit of ours, there was hardly any sign of noticeable lag. But it's not the best performing device in the segment either. If compared to the Redmi Note 7 Pro, the M40 is slightly less powerful but feels better to use because of its smooth One UI experience.

Since PUBG Mobile is still an obsession with the youth, so we played it on the M40. Again, the performance is respectable, and the game is playable in medium settings, but serious gamers should look for better options as there are a couple in the same price range. We would still say buying a POCO F1 will always be a better deal if performance is the priority.

The M40 comes with the Samsung Experience 9.5 UI based on Android 9, and we've liked the UI experience on the previous M-series phones as well.

It would be unfair to say that it's the best experience on a smartphone in this range, but still, it's one of the better custom UIs you get in this segment. Moreover, Samsung continues to provide third-party apps like Dailyhunt, Microsoft Apps suite, Amazon India, along with some Samsung essential apps. Some of these apps are removable except for Microsoft and Samsung apps.

On the lockscreen, Glance displays a magazine style news cards curated from various publications. At times, these lock screen stories can prove to be a bit distracting, but you can always turn it off from the settings.

Samsung has outfitted the Galaxy M40 with a 3500mAh battery which also supports fast charging via the 15W adapter provided in-the-box.

In our usage, it took around 90 minutes for the phone to charge from 0% to 100% using the fast charging adapter. The same goes up to 160 minutes on the M30 as it has a bigger battery.

The M40 smoothly sails through a day and a half on a single charge when used moderately. Naturally, on heavy use which includes playing games or watching videos for a long duration, the M30 may ask for a recharge before the day ends.

Things you must know

We haven't mentioned some of the aspects of the Galaxy M40 in the review. One of them is the missing headphone jack, which might be a concern for some users as none of the phones of this cost have been brave enough to ditch the 3.5mm jack. Thankfully, Samsung bundles USB Type-C headphones inside the box, which are good.

As mentioned, the M40 does not have an earpiece, so it uses its screen as a speaker and doesn't feel awkward to use. Also, it's essential to acknowledge that Samsung is still putting a dedicated microSD card slot and dual SIM slots, which is a big concern for consumers in India.

There's arguably nothing apart from the punch-hole design, SD675 and the 32MP primary camera that makes the M40 a 'better' smartphone than the M30. We liked the rear camera, software experience, and the display of the M40, but it fails to match up to the value that the Galaxy M30 offers at its price. More so, because there is already enough option under this price that offers a better overall composition of specs and experience.

A bigger battery, better front camera, or a single unique feature could have added more value to the Galaxy M40. The punch-hole design doesn't justify the premium you pay over the M30, which has a better display and battery life.