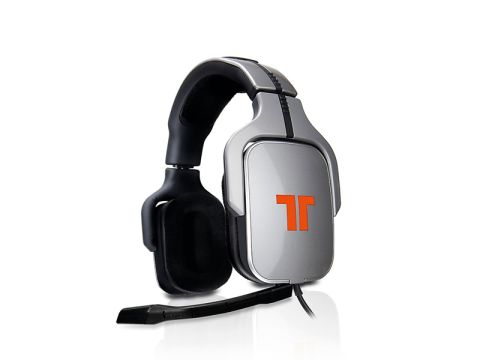 An impressive set of cans with convincing surround sound, but can become heavy after a while

The Tritton AX Pro surround sound headphones ship with their own Dolby Digital 5.1 decoder module and employ a quartet of dedicated channel drivers in each ear cup.

Peel away one of the felt pads and you'll uncover a pair of 30mm drivers, one for the front left/right and the other for a surround channel, plus a 23mm driver for the centre and a large 40mm driver to handle the .1 LFE.

The system is compatible with any surround sound source. Run an optical lead from your chosen component into the AX pro DD5.1 decoder; this then feeds the speaker drivers via a 4m cable.

The AX Pro headphones are well built and substantial, with firm padded cups and head rail.

The resulting surround experience is undeniably authentic. Dialogue is anchored mid-forehead while panned effects encircle your skull. Aggressive surround mixes are surprisingly intense. You can also adjust the volume level of each individual channel, controlled by a lit in-line adjuster.

The Tritton AX Pro are at their best with games. In-game Dolby Digital processing dynamically steers audio effects based on what you're doing in the game.

The AX Pro headphones offer immersive multichannel sound. There's a sense of purpose to their sound steerage which replicates a multi-speaker sound system. The cans can also be used with a Blu-ray/DVD player, Sky box etc or games console (Xbox 360, PS3).

While steerage is convincing, the sonic quality of the headphones is less so. Their timbre is more brutal than musical. Not for late-night classical listening.

Also worth considering is while they are well built, the weight of the headphones becomes onerous after a while.