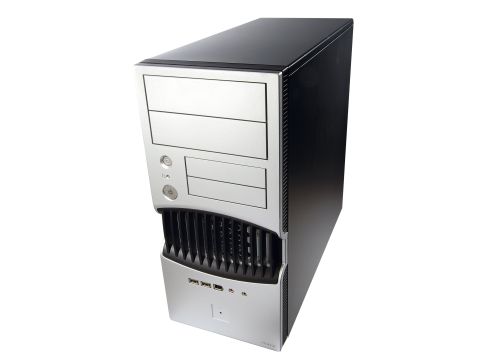 BTX really is the way forward, as it offers superior component cooling

Cool, but unsuitable for ATX-based systems

As you can see from the photo, this new chassis from Antec isn't some jazzy, bejewelled gamer's case, replete with flashing disco LEDs. However, as Antec tends to cater to the gaming fraternity, that may come as a surprise. No, this case is altogether laid back - understated even. However, that doesn't stop it from being really rather effective.

As a BTX form-factor chassis, you'll need a micro-BTX motherboard to slot into it. It's not designed with ATX boards in mind, so if you're thinking of an upgrade, you might be looking at a bigger spend than you initially thought.

However, BTX really is the way forward, as the form factor offers superior component cooling. We were pleased as punch at the efficiency with which airflow is directed across the CPU cooler in the BK640B; it's piped in the front by an optional fan unit, and is passed via a plastic housing directly to the CPU, then drawn out at the rear by another fan.

The whole system is very efficient and, providing you get some large, lowspeed fans to complement the setup, it's dead quiet to boot.

The built-in 380-watt PSU is extremely quiet too. Make no bones, this chassis forms the housing of an extremely discreet PC. The build quality is also up to Antec's usual high standards; it's solid as a rock, and made from quality materials. The moment you pry the side off, you know this isn't some cheap-and-cheerful box; real thought has gone into the design.

As far as looks go, we'd describe it as inoffensive. Whether or not you like the grill effect on the front is entirely subjective, but overall, it's certainly not an in-your-face style. And neither is the price tag - at around £60, it's really quite acceptable, especially as you're getting a decent PSU into the bargain. Overall then, a quality case - but only for Micro BTX motherboards. ATX users need not apply! Al Bickham