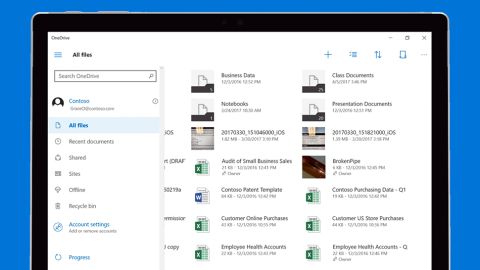 From a slow start, OneDrive has evolved to be a more than adequate cloud syncing and storage service – but there's still room for improvement.

Microsoft may have been slow in adapting to a cloud-first computing age, but OneDrive now underpins everything else in Microsoft Office 365 – it's a place to store files, the key to collaboration in Word, Excel and PowerPoint, and the home of the free online apps too.

Beyond that, OneDrive can sync files between desktops, laptops and mobile devices, making it – on paper – as comprehensive a cloud storage system as you can find. But how does it stack up in real world use against the likes of Dropbox, Google Drive, iCloud and others?

There is no single OneDrive interface, as it's spread out all over your devices – it's built right into Windows 10, for example, with little syncing icons being the only indication that OneDrive folders are any different to standard folders in File Explorer.

OneDrive integration in Windows has been clunky and buggy in the past, but in 2018 Microsoft finally seems to have got everything ironed out. Drop a file or folder into OneDrive, and it's synced to the cloud (and your other devices) – if you want to save space on your local machine, you can just keep a copy in the cloud.

The web interface, which you can access from any computer using your Microsoft ID, isn't quite as polished – it doesn't have the simplicity and style of something like, say, Google Drive or Dropbox. It does the job of displaying your media, and sharing your files, and letting you move files around, but it doesn't do it with much panache.

Elsewhere it's a mixed bag. The syncing client for macOS isn't particularly inspiring, but like the web interface, just about covers everything you're going to need without being too confusing (it runs from the menu bar, and can optionally start up with macOS).

It's perhaps on the mobile front where OneDrive is most impressive. The apps for Android and iOS feel elegant and intuitive to use, letting you jump around folders and files with a few swipes and taps. They do a particularly good job of syncing and displaying photos and videos you've snapped on your phone – though OneDrive has plenty of competition in that area, of course.

OneDrive just has the one key feature: syncing your files across devices, and keeping them safely stored on the web. For the standard Office 365 pricing (see below), each user gets 1TB of online storage to work with, while the more expensive enterprise plans (£17.60/$20 per user per month and up) offer an unlimited amount of storage.

If you opt to store your Office files (Word, Excel, PowerPoint) in OneDrive, some extra tricks are enabled: autosaving (so you never lose your work), and advanced collaboration features that let you work on files at the same time with other people, right inside the desktop applications or on the web. You can also recover deleted files up to 30 days after they've been erased.

That's the core of OneDrive, but there are some cool extra tricks too – playing audio and video files straight from the web, for example, or using AI-enhanced search to spot landmarks and objects in photos you've stored in the cloud. With Google Photos being such a strong service, it's easy to see how OneDrive could spin out its photo and video offering in the near future, at least for consumers.

In fact search is strong across the whole OneDrive platform, enabling you to pluck the right file out of a mass of folders and data – it will even search through text in images for you. We also like the Delve interface, which uses machine learning to surface the files that you're most likely to need next (based on what you've opened recently and who else is using those files). More of this please, Microsoft.

With tight integration with the rest of Office 365 (you can quickly add attachments from OneDrive in Outlook for example), OneDrive should be the backbone that you don't often see, but which keeps the rest of your applications in the suite running smoothly – and on the whole, it achieves this goal.

The OneDrive apps for Android, iOS and the web are arguably more important than the equivalents for Word, Excel and PowerPoint, because OneDrive's whole reason for existing is to enable you to get at your files from anywhere at any time – and in that respect, as we've said, it works very well.

Most files can be viewed on the web and on mobile devices without a separate app. On the web, if you open up an Office file, it launches the relevant online Office app in your browser. On mobile, you can view the file through OneDrive, but you can't make any edits (you need the individual mobile apps for that).

You get all the basics of moving files around on the web, plus the advanced search capabilities that we mentioned above. Most of the time, if you're sat at your computer, you're going to be doing these operations in Windows or macOS, but the browser interface is a handy backup if you find yourself on an unfamiliar computer.

The OneDrive apps for Android and iOS cover all the essentials too, including the option to store certain files for offline access if needed. The document and business card scanning capabilities are nice little extras that might come in useful, and as you would expect it's easy to share files with other people and other apps on your devices.

If you turn on notifications you can get alerts about changes to recent files, which is handy if you're working on a lot of different documents and spreadsheets as a team, and the apps also include built-in annotation tools for PDFs – so you can make notes on these types of files without having to open up another app.

Everyone in your company team gets 1TB of storage space as part of an Office 365 Business subscription, costing £7.90 per user per month (plus VAT) with an annual plan, or £9.50 per user per month (plus VAT) with a monthly plan (that's $8.25 or $10 respectively if you're in the US). If you need more time to think about it, you can use the 30-day trial to test everything out without paying.

OneDrive got off to a sticky start in its early years (and was originally called SkyDrive), as upstarts such as Dropbox showed how every app and program would work in the future. Microsoft's cloud solution still has some catching up to do in 2018 in terms of both look and features, but the situation has improved a lot.

You can now rely on OneDrive to store, sync and share your files effectively, and while it might not have the polish of Dropbox or Google Drive overall, it works perfectly well and has some neat tricks of its own to show off. You might not buy Office 365 for OneDrive, but it makes the whole package better.