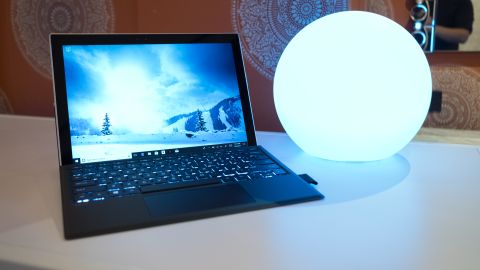 The HP Envy x2 is an incredibly thin Windows 10 tablet with a classy design that’s equally as impressive. If Qualcomm's Snapdragon 835 chipset proves to be as good as it promised, this could well be the best slate of next year.

We’ve been looking forward to Qualcomm’s long-promised entry into the Windows 10 laptop and tablet space. However, we were equally worried its launch would simply lead to another swath of cheap Windows 10 S devices designed to compete with Chromebooks.

Thankfully though, the HP Envy x2 has alleviated all of our concerns with its impeccably thin and ambitiously premium design.

What’s more, with the lofty promise of a 20-hour battery life and the fact that it’s actually lighter than an iPad Pro, this could well be the Windows 10 tablet to rival - and potentially replace - Apple’s ever-popular slate.

Measuring in at an incredibly thin 6.9mm and weighing just 1.54 pounds, the Envy x2 is actually lighter than the iPad Pro. Not only will that put less stress on your back and shoulders as you carry it around, you'll get a bigger 12.3-inch display with a WUXGA 1920 x 1280 resolution display to boot.

If you're concerned about the keyboard, it's as tactile anything you’ll find on bonafide laptop thanks to it offering 1.3mm of key travel. The HP Envy x2 also has one of the best designed keyboard folio’s we’ve seen on a 2-in-1 tablet.

The case magnetizes to both the back and bottom lip of the tablet, while folding down the top section to act as a kickstand. Thanks to all of this extra stabilization, we didn’t have any of the stability problems we encountered on the Samsung Galaxy Book and Huawei MateBook E.

Moving onto the chassis, the HP Envy x2 sports a sharp and clean design that could be easily mistaken for the company’s even more premium Spectre line. This is thanks to HP going with a completely metal unibody chassis with an anodized finish that feels rugged enough to shrug off scratches.

Of course the other headlining feature of this tablet is the fact that it's powered by a Snapdragon 835 processor, the very same chip that has powered some of 2017’s top smartphones like the Samsung Galaxy S8.

While this might seem like it wouldn’t offer enough performance to power the full fat Windows 10 S operating system that comes baked in, the tablet performed admirably as we navigated the interface and used Microsoft’s Office applications and browsing the web on Edge.

HP and Qualcomm promise a 20-hour battery life on the HP Envy x2, and while it's a lofty promise, if it’s true this could well be the longest-lasting Windows 10 device we’ve ever tested. Last but not least, one big advantage the Snapdragon 835 chip offers is a built-in LTE antenna that will be invaluable to users on the go, who don’t have a problem with adding another device to their data plan.

The HP Envy x2 is otherwise as well specced as any Intel-powered Windows machine with up to 8GB of RAM and a 256GB SSD.

Compared to other Intel-powered tablets, Qualcomm is offering an incredible value - especially when stacked against the market leader, the Surface Pro.

The HP Envy x2 is an eye-catching device all on its own with a sharply designed and ultra-premium body. Factor in the incredible battery life and potential affordability Qualcomm Snapdragon processor brings – going off how affordable the Asus Novago is at least – and we could see a big shake up for laptops in 2018.