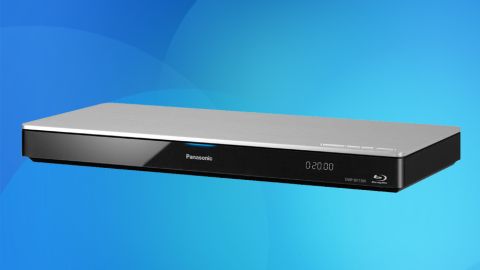 Those after some specific apps, Wi-Fi, and both 2D and 3D Blu-ray, will find the DMP-BDT360 a simple to control and impressive machine. 2D-3D conversion works well and 4k upscaling is effective and adds a touch of future-proofing. Digital file handling is good, too, though a poor remote and a basic selection of apps take-off the polish.

They're not unwelcome though they should probably be at the back, which is where you'll also find a single HDMI output, an optical digital audio output, and a Ethernet LAN for wired internet access (though the DMP-BDT360 also includes Wi-Fi). The DMP-BDT360 can also fetch files from HDDs and computers using DLNA.

Though the DMP-BDT360 has relatively few video apps, in order to actually stream over the web you must create data files, and without any built-in flash storage (something suddenly out of fashion among all Blu-ray player makers, it appears), it's necessary to insert a USB stick in the front at all times, which is a shame.

Perhaps the biggest reason to buy the DMP-BDT360 isn't those physical changes or the 2D-3D conversion, but the addition of 4K upscaling. Being able to output a Blu-ray image upscaled to 4K quality – at 24 frames per second – is a future-proof feature for most of us.

More in the here and now is the DMP-BDT360's respectable selection of apps. It's fitted with Viera Connect, which on the UK version we tried out had – by default – the BBC iPlayer, BBC News, Netflix, BBC Sport, MySpace, YouTube, iConcerts, CNBC Real-Time, PlayJam Games, SHOUTcast Radio, Dailymotion, Euronews, Aupeo radio, Twitter, Facebook and a web browser. Those apps are presented in grids over three pages, all of which centre on a live feed from the Blu-ray disc tray.

That's a lot compared that to the paltry eight apps that sit on the DMP-BDT260. There's also a link to various customisation pages and an online market that includes a further batch of apps – especially games – to download.

However, do be careful if you're buying the DMP-BDT360 in the UK. It's sold exclusively by Currys, but its website advertises it as offering Bluetooth, Sky's Now TV app and the Spotify app. It has none of these things. It also advises that you'll need 'Ultra HD 4K discs', whatever they are.

Behind a decent smart apps platform is the same rather basic directional user interface found on all Panasonic Blu-ray machines for 2014. It's a simple screen split into five, with Setup at the centre flanked by shortcuts to Video, Music, Photos and Networks. The first three lead to a further choice of source (disc or USB), while Network leads to all apps and DLNA networking of digital files.

We do like the user interface's simplicity, especially the reliance on the tiny remote control's directional buttons to indicate where to go next – there's far less button-pressing to do than on other Blu-ray players.

The DMP-BDT360 is an excellent disc spinner, and more besides. Some action from Inside Llewyn Davis marks the DMP-BDT360 out as being all about clarity, cleanness, natural colours and excellent contrast.

Upscaled to a watch on an Ultra HD TV, the images are wholly convincing and keep perhaps not their ultimate detail, but certainly their consistency and smooth clarity.

2D-3D conversion works well, too, which is a first; a scene from Inside Llewyn Davis where Llewyn's cat Ulysses runs down the metro train contains plenty of impressive and surprisingly consistent depth effects. However, the conversion process appears to clash with 4K upscaling; watched on an Ultra HD telly this mode introduces some noticeable picture noise.

Shift to 3D for real – thanks to our trusty Gravity 3D Blu-ray disc – and the DMP-BDT360 really delivers. There's an attempt at dedicated 3D picture settings, including a Graphic Display Level, which determines the depth level. However impressive the highest setting is initially (some kind of super-charged 3D depth effect), out of the four settings, only the mildest is completely crosstalk-free. There are also nine Distance settings but, again, most introduce crosstalk.

Watched on an Ultra HD TV, Gravity is 2D looks excellent – clean and detailed – save for a touch of crosstalk across the infinity backgrounds of deep space. However, the 3D disc upscaled for an Ultra HD telly appears to introduce some picture noise.