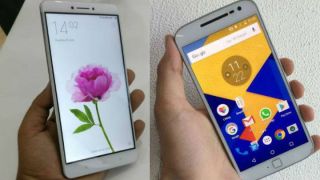 The Mi Max is Xiaomi's biggest phablet to date with a gigantic 6.44'inch display, and aims to redefine the 6-inch and above smartphone category in India.

Hugo Barra highlighted how tablets with voice calling facility were getting immensely popular in the country, and the Mi Max aims to cater to those looking for the same experience, but in a package which is still pocketable and can be used with one hand.

Along with the 6.44-inch supersize full HD IPS display, the Mi Max comes with a 4,850mAh battery, which the company claims can last for 14 hours of 1080p Youtube video streaming. This is both the largest display and the largest battery that Xiaomi has ever packed in it's smartphones.

Does the Mi Max have what it takes to compete with the budget smartphone king, the Moto G4 Plus? Let's find out.

The Xiaomi Mi Max comes with a supersized 6.44-inch full HD IPS display, with a resolution of 1920x1080 pixels. The display is protected by Gorilla Glass 3 and has a pixel density of 342 ppi.

The Display is crisp and vivid, with punchy colors and good viewing angles. The brightness levels however are a bit disappointing, and that will not fare well for the device in terms of sunlight legibility.The mammoth screen size is perfect for watching movies and videos, or consuming content on the web.

The Moto G4 Plus features a 5.5-inch full HD (1920x1080 pixels) display, with a pixel density of 401ppi. This is the first time a Moto G smartphone has come with a full HD display. The three previous generations had to make do with only a 720p panel. The display is also covered with Gorilla Glass 3 for protection.

The display is rather impressive, with vivid colors, good viewing angles and great brightness levels.

Both smartphones lack a QHD display, and have their own positives and negatives, The Moto G4's display is sharper, has better brightness levels and viewing angles as well as deeper blacks. On the hand, for those looking for a device aimed at media consumption, the 5.5-inch display on the Moto G4 cannot match the experience that the mammoth 6.44-inch display of the Mi Max provides.

The MiMax looks incredibly premium with a full metal body and double chamfered edges. The front surface is covered by a 2.5D glass protected by Corning Gorilla Glass 3.

What is surprising though is the in hand feel. Before getting my hands on the device, i was expecting it be heavy and clunky because of the huge screen. However, the MiMax, while still too wide and hefty for extensive one hand use, does not feel that unwieldy and awkward to use.

The Moto G4 Plus on the other hand, features a removable plastic back, an all glass front and a silver finish around the sides (also made of plastic).

The body is unashamedly plastic, and the removable back is quite flimsy and bends rather easily. The phone does feel good in the hand, although the back creaks and flexes quite a bit. The smartphone doesn't feel anywhere near as premium as the competition.

However, being a plastic device, the Moto G4 feels extremely durable and able to withstand a few bumps and knocks.

Overall, the Mi Max comes out on top here, with it's classy metal construction and more premium design.

The Xioami Mi Max comes with a 16MP PDAF rear camera with a dual LED flash and an aperture of f/2.0 along with a 5MP front shooter. The front camera has a 'Beautify' feature that guesses age and gender to apply 36 smart filters in order to get the perfect selfie.

In my limited hands-on with the device, the camera seemed par for the course and produced decent results.

The Moto G4 Plus features a 16MP auto-focus rear camera with laser auto focus and phase auto detection along with a 5MP wide-angle front camera for selfies.

In well-lit situations, the results are not bad at all, quite sharp, with good color saturation and acceptable detail. Though some noise does creep in. However, as has been with all previous Moto smartphones, low light situations are its Achilles heel. It's not as if the images are a dark and muddy affair, however, they lack detailing, have lots of noise and lack sharpness.

Both smartphones have very similar specifications when it comes to their cameras and the verdict will have to wait till we extensively test the Mi Max's camera.

The Mi Max runs on Xiaomi's own MIUI 7 running atop Android 6.0.1 Marshmallow. While Xiaomi has extensive modified and tweaked Android in MIUI, it is on the whole, very smooth and light, and is amongst the better Android skins out there. However, sometimes, it does struggle with even basic tasks like opening the dealer or swiping through photos.

Inspired by the kaleidoscope, MIUI8 features a revamped design language with an emphasis on bold colours and interactive animations. It also comes with several small but significant features aimed at simplifying a user's life such as Dual Apps, Second Space and Scrolling screenshots and Quick Ball.

You can read more about MIUI 8 here .

The Moto G4 Plus continues Motorola's tradition of an almost 100% stock Android experience. Apart from a few Motorola applications and gestures, the phone runs on a stock build of Android 6.0.1 Marshmallow.

Motorola, like HTC has also removed some of its duplicate apps, leaving only Google's offerings on the smartphone such as Photos, Play Music etc. This is a welcome move, and helps reduce clutter and confusion. Motorola also includes gestures like shake to activate the torch and twist to launch the camera, which work near flawlessly. In addition, Motorola also includes its 'glance' view, which shows you the time and any notifications when you wave your hand over the screen.

While MIUI 8 promises to be a great update, this round will have to go to the Moto G4 Plus, as nothing can match the usability and experience that stock Android provides.

On the connectivity front, the Xiaomi Mi Max supports 4G LTE, 3G, GPRS/EDGE, Wi-Fi 802.11 a/b/g/n/c, NFC, GPS/A-GPS, GLONASS, micro USB for charging and data transfer. and Bluetooth 4.2. It also comes with a hybrid slot with allows for either two nano-sims or one nano sim and a micro SD card (up-to 128GB).

The inclusions of NFC along with the fingerprint sensor means that the device can be used with Android Pay.

On the other hand, the Moto G4 Plus supports 4G LTE, 3G, 2G, Wi-Fi, Bluetooth 4.0 and GPS. It also comes with dualSIM support. What is missing though is NFC, which means the fingerprint scanner cannot be used for Android Pay.

The lack of NFC on the Moto G4 is very disappointing considering how NFC is no longer a niche and is becoming more and more common. The Mi Max comes out on top here by virtue of supporting the same. Both devices lack support for USB Type C.

Under the hood, the Xiaomi Mi Max packs a either a hexa-core Snapdragon 650 or a octa-core Snapdragon 652 processor, depending on the variant. Additionally, the device comes with 3/4GB of RAM, an Adreno 510 GPU, and 32/128GB of internal storage, which can be expanded via a microSD card (Upto 128GB).

The Moto G4 Plus is powered by a 1.5GHz octa-core Snapdragon 617 processor paired with a 550 MHz Adreno 405 GPU and either 2GB RAM + 16GB internal storage or 3GB RAM + 32GB internal storage. The internal memory can be expanded up to 200GB through a microSD card.

The Mi Max packs some decent hardware for the price, and in my limited usage, seemed to perform admirably. The device handled day to day tasks like scrolling through photos, navigating through home screens, opening applications, browsing the net easily.

The Moto G4 Plus is more than capable of handling daily tasks, and handles casual use such as web browsing, scrolling through photos and lists, taking pictures etc. without any major lag or stutters. The inclusion of the Snapdragon 617 is a major improvement over the Snapdragon 400 series found in the previous three generations, helping the phone accomplish day to day tasks without any hassle.

On paper, the Mi Max holds the advantage as it has the more powerful Snapdragon 650 SoC. However, a full performance appraisal will have to wait till we test it extensively for our full review.

Along with the 6.44-inch supersize full HD IPS display, the Mi Max comes with a 4,850mAh battery, which the company claims can last for 14 hours of 1080p Youtube video streaming. This is the largest battery that Xiaomi has ever packed in it's smartphones.

The Moto G4 Plus has a 3,000mAh battery unit with TurboCharging support that as per Motorola delivers 6 hours of usage with just 15 minutes of charging. .

The Xiaomi Mi Max aims to establish a new smartphone category, catering to those who want the immersiveness of a tablet with the mobility of a smartphone and to an extent, Xiaomi seems to have succeeded with the same.

What cannot be denied is that the Mi Max is a gigantic device, and will definitely be too heavy, clunky, unwieldy and awkward for a lot of users. But at the same time, people's appetite for content consumption on their smartphones in increasing voraciously and the Mi Max provides a fantastic experience for watching videos, movies, reading e-books and browsing the web.

The Moto G4 Plus is a compelling buy, and continues the G series of smartphone's tradition of providing good smartphones at an affordable price. It has a superb display, fast and accurate fingerprint sensor, stock android and performs admirably well. However, the all plastic construction of the Moto G4 doesn't inspire much confidence. In addition, the mediocre battery life and the underwhelming camera let it down.

The 4GB RAM variant of the Mi Max is a tad overpriced at Rs 14,999, but comes with a whopping 128GB of internal storage.

In the end, the choice between the two smartphones depends solely on what type of device you are looking to buy. The Mi Max is a fantastic purchase for those who want a smartphone mostly for media consumption with it;s mammoth display, while the Moto G4 Plus provides a fast and reliable stock Android experience at an affordable price.