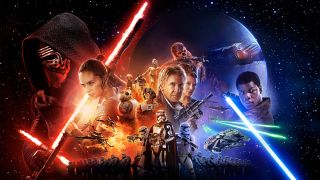 The first of a series of VR experiences tied in with the Star Wars: The Force Awakens is finally here, but you'll need a Google Cardboard to check it out.

You'll also need the free Star Wars app, available on both Android and iOS devices, where a new section, called Jakku Spy, opened up this morning offering up the first VR experience.

After you've downloaded the app and clicked on the Jakku Spy section and the first clip (the only one currently available), wait for the clip to download, then slot your smartphone into the Google Cardboard once the countdown begins.

If you're a Verizon customer in the US, you can swing by a Verizon store and pick up a special Star Wars-themed Google Cardboard. Otherwise, you can order one from Google or just build your own.

The Google Cardboard-friendly VR experiences come as part of the deal with Google that launched last month with a site that urges you to choose between the dark or light side.

In the Star Wars app, the first Jakku Spy VR clip - or 'experience' - lasts only about a minute long, but has the BB-8 droid making an appearance on the world Jakku, and you get to see the golden crawl in VR.

The series of VR experiences, which was announced earlier this year, have been developed by Lucasfilm's ILMxLAB, the AR and VR arm of Industrial Light and Magic, in conjunction with the film.

There are eight more experiences still to come, with each new clip to land every few days up until the launch of Star Wars: The Force Awakens on December 18.