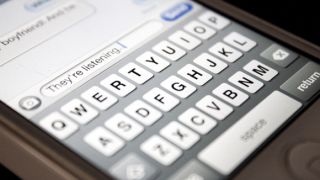 It's all but confirmed - they're listening AND reading

The leaked materials provided by NSA whistle-blower Edward Snowden have revealed yet another worrisome surveillance program, this one focused on text messages.

Called "Dishfire," the program reportedly involves the collection of up to nearly 200 million text messages every single day.

Even more troublesome is the assertion that the NSA isn't targeting anyone in particular, but nonspecific groups of apparently randomly selected people across the globe.

Dishfire was unearthed by The Guardian, which collaborated with the UK's Channel 4 News for its report.

Much of the information in The Guardian's report stems from a 2011 NSA presentation titled "Content Extraction Enhancements for Target Analytics."

Tellingly, the subtitle for that presentation reads "SMS Text Messages: A Goldmine to Exploit."

'Dishfire collects pretty much everything it can'

One caveat is that data retrieved from US numbers was reportedly "minimized."

And though the UK's Government Communications Headquarters (GCHQ) reportedly has access to the texts collected for the Dishfire program, there are apparently restrictions to what data it can access, and how.

In a statement sent to The Guardian, an NSA spokesperson said the assertion that Dishfire collected "untargeted" SMS data is "false."

But the publication cites a GCHQ "memo" that states Dishfire's database contains "a large volume of unselected SMS traffic" and that it "collects pretty much everything it can." Might be hard to wiggle out of that one.

President Barack Obama on Friday is scheduled to speak about these and other issues related to the NSA.