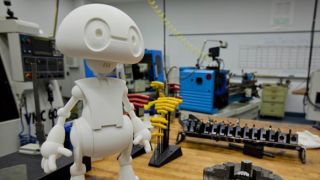 Meet Jimmy, a dancing robot made with 3D printed parts

Most wearables are smart gadgets that can be worn, but Intel wants to take it one step further by smartening up our clothes.

Intel revealed its kooky visions for the future at the 2014 Code Conference, where its smart shirt and 3D-printed robots stood under the same spotlight that also illuminated Google's new self-driving cars and Microsoft's near-real-time translation software this week.

He said the sensors can communicate with a smartphone app, according to Engadget.

And while Intel is only building the sensors - not the shirt itself - Krzanich said the company's vision includes "eyes, ears, wrist and torso" wearables, not just shirts.

Intel expects to launch the smart shirt this summer.

That money will get you a kit that includes elements that can't be 3D printed, like wires, batteries and processors. But the rest of the robot will be 3D printed, and the schematics will be available freely online.

It's also open source, so developers can create their own "apps" to run on the robot, letting users customize their robots like smartphones. So get ready for a resurgence of highly advanced fart-noise apps.