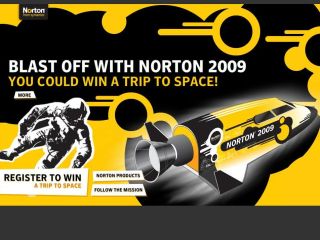 Are there viruses in space?

We at TechRadar don't often publish details about competitions because, well, they're not very tech-related, but the latest one from the makers of Norton Anti-Virus is a humdinger.

As the press release says, less than 500 people have ever been into space, but one lucky virus-fighter will get the chance to join that exclusive club in the sky (no, not that one... apparently you need harnesses for that in space).

Three competition winners will be first invited for a zero-gravity flight on the 'Vomit Comet', where they can experience weightlessness and all the fun that brings, then one of these will ascend to the final frontier.

We're not sure how Symantec plans to choose the grand prize winner, who will spend around five minutes in space before being brought back down (we know it's a short amount of time, but it's space. Come on).

We assume they'll be assessing those winners to make sure they won't have a heart attack or something on the way up... you know, sensible things like that, and not a simple fight to the death kind of competition when weightless.

The competition is meant to represent the fastest software from Norton's new software, which can blah blah blah, we don't care about the reasons, we're going to register on the website four billion times (if we're allowed) to get a chance to see the great firewall of China from the sky.