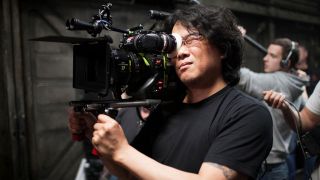 Having shown the world how well the simultaneous theatrical and streaming distribution model works with its film, Beasts of No Nation, Netflix is wasting no time in securing more original movies for its ever-growing content lineup.

Netflix has announced a deal with Brad Pitt’s production company, Plan B, to finance the creature feature Okja, from Snowpiercer director, Bong Joon-ho.

According to The Wrap, the streaming service is putting $50 million into the movie, which will follow a Korean girl who befriends a lovable monster.

Okja will split its running time between Korea and the United States, with Jake Gyllenhaal, Tilda Swinton, Bill Nighy, Paul Dano and Kelly Macdonald filling out its stateside cast.

The Host with the most

Having recently declared its commitment to creating content for a global audience, the financing of Okja seems like a smart move for the streaming service, as it’s likely to appeal to two completely different markets, and will also be a significant catalogue addition for Netflix in the Asian territories where it’s set to launch in 2016.

In his official statement, Bong called the deal “a fantastic opportunity” and said “I needed a bigger budget than I had for Snowpiercer and also complete creative freedom,” praising Netflix for offering him “the two conditions that are difficult to have in hand simultaneously.”

It’s no surprise that Bong is relishing the creative freedom offered by Netflix, as the director famously fought hard to get Snowpiercer released without being cut to shreds by its distributor, The Weinstein Company.

Okja is expected to start filming in April for a theatrical and streaming release in the first half of 2017.