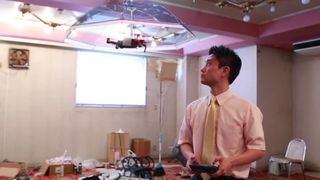 Follow-me tech has become a staple of some of the best drones, from the DJI Mavic Air to the Parrot Bebop 2. The Skydio R1 can now even follow your car around and film you as you drive.

But one Japanese drone-maker wants to take things a step further. Asahi Power Service (APS) has built a prototype for Free Parasol, a drone that tracks its owner’s head in order to constantly fly just above it, protecting him or her from the sun and rain, Sora News reports.

However, we don’t know yet what other features Free Parasol will have besides its autonomous mode.

At 150cm wide (59 inches) and 5kg (11 pounds), the Free Parasol prototype can travel 20 minutes per charge, and employs AI tech and cameras to track and autonomously follow its owner.

When the retail version hits the market, APS hopes to reduce the weight to 1kg (2 pounds) and triple the flight time per charge to an hour.

More importantly, the drone-maker still needs to waterproof Free Parasol: as of now, it can protect you against the sun, and provide a cool breeze from its propellers, but it can’t handle getting wet. APS plans to implement this by time of sale, however.

The viability of luxury drones

With a drone flying that close to your head, APS doesn’t mention anything about sound reduction.

Drone buzzing tends to infuriate people even from a hundred yards away, and one could easily imagine passersby looking askance at a drone flying overhead that sounds like a leaf blower.

Overall, drones have strict regulations in most countries concerning where they can fly, and a few feet above foot traffic won’t cut it in pretty much any nation.

APS is hoping to sidestep the issue by marketing Free Parasol for use in private areas like golf courses, where property owners could implement their own rules on drone usage.

The question is, will a golf course or other private outdoor venues shell out thousands of dollars on drones for their clients to begin with, when simple mechanical umbrellas would suffice?

Hands-free protection from the weather sounds really cool, but it may not be worth the headache considering drones' limited charge time and potential for accidental concussions.

Via Gizmodo and Sora News 24