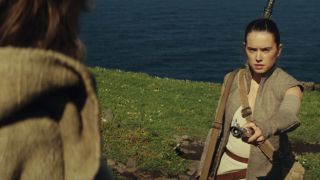 Luke Skywalker (Mark Hamill) might not have said a peep at all in Star Wars: The Force Awakens, but he's the only voice we hear in the entire Star Wars Episode VIII trailer as the Last Jedi.

Just as we hoped, Luke will be teaching Rey (Daisy Ridley) the ways of the force and as she's trains with a lightsaber on the familiar cliffs where Episode VII ended.

Finn is still recovering from some serious lightsaber cuts to the back. Elsewhere, it appears not is all is well for the Resistance as laser fire rains down on a base where Poe Dameron is stationed and there will be a massive space battle at some point in the film

Throughout the trailer, Luke recites the same lines Ben Kenobi said during his own training. However, the short teaser ends ominously on this line; “I only know one truth. It’s time for the Jedi to end."