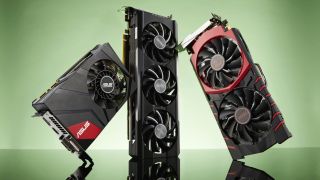 Whether it's snug in your PC cabinet or soldered on your laptop, the graphics card is the key component for PC gaming. Anyone even remotely interested in gaming would tell you that integrated graphics solutions don't really work, if you want to play the top and newest games.

A graphics card doesn’t even need to take up a ton of space. With Nvidia’s cutting-edge Max-Q tech for instance, you can run games in 4K in considerably thin laptops. But it comes at a pretty hefty price tag. Take the Asus ROG Zephyrus for an example.

AMD's renewed interest in high-end components showcased by the Radeon RX Vega has started a whole new battle in the best graphic cards market. So, here's some help to make your choice easier.

Performance-wise, the GTX 1080 Ti can’t compete with dual-wielding 1080s, but it is cheaper and it supports a larger pool of games than two lesser SLI cards. Aside from the mysterious absence of a DVI port, the GTX 1080 Ti looks identical to any of the other Pascal-series GPUs. However, take a closer inside and you’ll notice a sophisticated cooling system needed to keep all of your games running smoothly in up to 4K resolutions.

For Indian buyers though, value for money is often more important than raw power. And we think the Nvidia GeForce GTX 1060 is unparalleled when it comes to sheer value.

For a reasonable price, this graphics card offers 1080p gaming and – perhaps with a bit of overclocking – even 1440p. At the same time, however, the GTX 1060 doesn’t have SLI support, so you’re limited to a single card at a time.

Competitive for both eSports and in price

The Nvidia GTX 1050 Ti is another an affordable option. It supports a lot of games at 60fps, however, it is a tad more expensive than the GTX 1050.