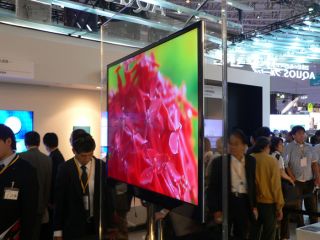 Thin TVs look like becoming the norm, rather than the exception

By now, we are well aware that it's possible to build TV sets that are little thicker than the glass panel we end up staring at, but such slim wonders are still prohibitively expensive.

That could change, however, if a new technology from NEC gains industry acceptance.

The Japanese firm has come up with a new kind of internal connector that more than halves the number of wires TV makers need to stuff behind the glass. By way of example, it says the usual 21 wires in a 37-inch LCD can be reduced to just eight.

By cutting the number of cables joining the image processing board to the display driver chips in a TV set, it's possible to reduce the entire space needed – NEC says it drops from 2cm to 1cm.

Moreover, the approach promises scope for improving TV performance, as it boosts the speed of the connections between a set's electronic parts, which could be used for more intensive image processing.