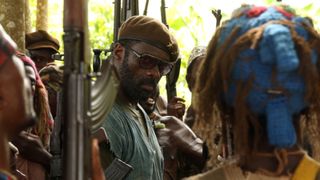 Netflix has just released the trailer of it's upcoming movie, Beasts of No Nation, and the Idris Elba starrer has us on edge already.

True Detective director Cary Fukunaga is behind the child soldier drama, which has recently been doing the film festival rounds where it has already received honors - we suspect Netflix will be pushing hard for an Academy Award nomination.

The film stars Idris Elba as a war lord, and follows the story of Agu, portrayed by child actor Abraham, who is forced to become a child soldier during the civil war of an unnamed African country.

Netflix has recently been betting big on original programming, and its film line up also includes Adam Sandler's The Ridiculous Six later this year, while Brad Pitt-led flick called War Machine and a Crouching Tiger, Hidden Dragon sequel is to be released next year.

Though Beasts of No Nation isn't technically the first movie to be released by Netflix - it won exclusive distribution rights to the documentary Virunga late last year - this will be its first original feature-length film.

Not only that, but the film is also set to be released in select cinemas and on Netflix simultaneously on October 16th.

While Netflix released a teaser earlier in July, you can check out the new full trailer below: