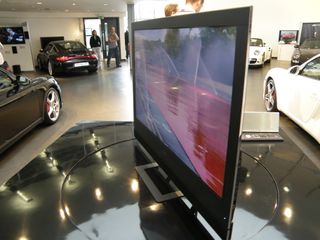 Super-slim and over here - the WX50 is coming this September

JVC revealed a number of new products to journalists today, choosing the Porsche Centre at Silverstone to preview what the company will be unveiling to the public at this year's IFA.

While we have to remain tight-lipped about JVC's new AV range, TechRadar did manage to spend some time with the company's super-slim WX50 LED side-lit LCD TV.

We gave you details of the WX50 (LT-32WX50EU is its full name) back in June, when it was shown of for the first time in CEDIA. And while we were impressed with what we saw then, as it was bolted to a wall, you couldn't quite get a feeling of just how skinny it is.

As the following pictures show, however, the TV is as close to OLED as you are likely to get size-wise, with the television measuring just 7.8mm wide.

The TV is unique in that it features colour space control for 90 per cent of Adobe's RGB colour space and comes with gamma adjustment.

Speaking to JVC, the company revealed to TechRadar is to have an expected retail price of £1,700 (though this is subject to change) and the TV will be out in September.

Also, a spokesperson for JVC hinted that there is more to come from the range in 2010 and beyond.

It seems likely that JVC is to try and get a 42-inch version of the set into the market-place sometime in 2010 and there's also a 50-inch set pencilled in for the future. Don't expect these TVs to be a skinny as the WX50, however, with them most likely to have a width of 10mm. Which, to be fair, is still super-thin.

Check out the TV for yourself, in the picture gallery below: