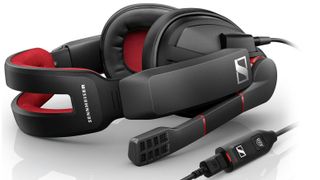 Whether you’ve been whiling away the hours on pirate co-op Sea of Thieves or saving lives on Project Hospital, the right headset could transform your gaming experience, making it more immersive than if you used your PC or laptops’ speakers.

If you’ve been looking for a new PC gaming headset, you may have come across the Sennheiser GSP 350, which is said to deliver a “premium audio experience” thanks to Dolby 7.1 Surround Sound - but is it worth the money?

At $139.95 (£119.99 / AU$188), it’s not the cheapest headset money can buy, particularly as it doesn’t support wireless listening. Wired headsets from competitors like Logitech tend to sit around the $100 - $120 mark, but perhaps it’s the addition of Dolby Sound that pushes up the price of the Sennheiser GSP 350.

Who is the Sennheiser GSP 350 for?

This headset is only compatible with PC (unless you buy an additional console cable for around $20 / £15 / AU$27), and has two cables. The first connects to the headset via a 2.5mm jack, and includes the 7.1 surround sound dongle, which enables Dolby Sound.

The second cable connects from the dongle to your PC via USB-A (ruling out use with one of the newer Apple Macbooks, which use USB-C). So, if you’re looking for something that will be immediately compatible with your PS4, Xbox One S, or smartphone, this isn’t the best headset for you.

However, if you’re an audiophile, you’ll probably be enticed by the promise of Dolby 7.1 surround sound - this is a form of virtual surround sound, which means the headset uses psychoacoustic properties to ‘trick’ your brain into thinking there are multiple sources of sound.

The audio can be adjusted with Sennheiser’s software, with four equalizer presets available to choose from; gaming, esports, music, and an ‘off’ setting for neutral sound, which is a cool feature if you want to get the best out of your games.

Of course it’s important that the input audio quality is just as good as the output, and the Sennheiser GSP 350 is equipped with a “broadcast-quality microphone”, which should do the trick when you’re shouting at irritating 12 year olds on Fortnite.

One cool feature of this headset is that you can mute your microphone by simply lifting up the short boom arm, making it super easy to turn on and off while you’re in the middle of a game.

In terms of design, it’s not the best looking headset we’ve ever seen, with a somewhat clunky look and a muted red and black color scheme - it looks fine, it’s just not particularly sleek.

Whether you should buy the Sennheiser GSP 350 is largely down to what you’re looking for from a gaming headset - if you game solely on your PC and want an immersive sound experience, it could be the right one for you.

However, if you are primarily a console user it’s worth looking elsewhere, particularly as the Sennheiser GSP 350 is rather expensive for a wired headset.

That being said, with Black Friday coming up on November 23, you may be able to find a great deal from retailers like Amazon or Dell - stick with TechRadar for real time deals updates in the lead up to Black Friday and Cyber Monday.