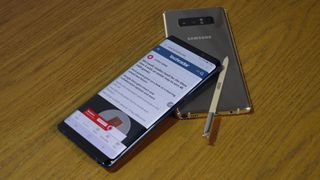 Samsung is due to announce the Samsung Galaxy Note 9 on August 9, but it seems that some units might already be in the wild, as one appears to have been unboxed on video.

Uploaded by MySmartPrice, the video shows a specs list on the back of the box, revealing a QHD+ Super AMOLED screen that’s 6.3 inches if you measure the full rectangle or 6.2 inches factoring in the rounded corners.

The list also includes 6GB of RAM, 64GB of storage, a pair of 12MP rear cameras, an 8MP front-facing camera, IP68 dust and water resistance, an iris scanner, wireless charging and AKG-tuned earphones, all of which is largely as has been rumored.

There’s no chipset listed but given the seemingly European charger in the box it probably uses the Exynos 9810, whereas the US version will likely use the Snapdragon 845.

The design of the Note 9 itself also matches previous leaks, with a glass back, a curved display and a look that’s generally a lot like the Samsung Galaxy Note 8’s, other than the position of the cameras and fingerprint scanner.

However, there is one red flag, as PocketNow notes that the font used on the screen sticker isn’t one Samsung typically uses for the range, so take this with a pinch of salt – it could be a fake.

From videos to renders

This isn’t the only Note 9 leak of the day though, as we’ve also seen a render of the phone in deep sea blue.

Other than the color there’s nothing new in the image, which was shared by MySmartPrice and looks otherwise identical to the lilac purple shade we saw recently.

However, it’s worth noting that it’s a slightly more muted shade of blue than the one we saw leak a while back, so if you were excited by that earlier bold shade you might be out of luck.