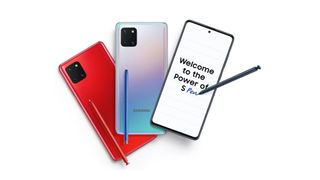 Samsung has announced a "lite" variant of its premium Galaxy Note 10 smartphone in India. The Galaxy Note 10 Lite supports the iconic SPen stylus input that's been an intricate tool for this range of phones.

Samsung Galaxy Note 10 Lite is priced starting at Rs 38,999 for the base variant with 6GB RAM and 128GB storage and Rs 40,999 for the top-end variant with 8GB RAM. The phone comes in three colours to choose from, Aura Glow, Aura Black and Aura Red.

As part of the launch offer, Samsung is offering up to Rs 5,000 off on the exchange of old smartphones making the effective price of the Galaxy Note 10 Lite to be Rs 33,999. Prebookings for the phone is live with the first sale scheduled for February 3 across major online and offline retailers.

Samsung Galaxy Note 10 Lite features a 6.7-inch Super AMOLED screen with a Full HD+ (2400 x 1080 pixels) resolution and a punch-hole cutout in the top-most area. This gives the screen a 20:9 aspect ratio and also support for HDR playback.

The Note 10 Lite is powered by homegrown Exynos 9810 chip with an octa-core CPU and Mali-G72 MP18 graphics processor. This is paired with 6GB/8GB RAM and 128GB storage which is further expandable by upto 1TB via microSD card.

The Galaxy Note 10 Lite has a triple camera setup on the back which consists of three 12MP cameras, a primary lens with an f/1.7 aperture, Dual Pixel PDAF, OIS support, a telephoto lens with OIS support and upto 2x optical zoom and finally an ultra-wide-angle lens with a 123-degree field of view. On the front, there's a 32MP selfie camera housed inside the punch-hole cutout.

It also supports Samsung DeX wherein the phone can be connected to a monitor for an extended desktop-like experience.

Samsung Galaxy Note 10 Lite is powered by a 4,500mAh battery with support for fast charging.