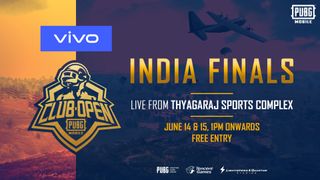 PUBG Mobile Club Open (PMCO) 2019 India finals are being held between June 14 and 15 at the Thyagaraj Sports Complex, New Delhi. The regional qualifiers will see 16 teams fight it out for 2.5 million USD and a chance to represent the country in the PMCO Global Spring Split Finals that will be held in Berlin, Germany in July 2019.

Fans of the popular battle royale game can head to the Thyagaraj Sports Complex, grab a popcorn and watch the action unfolding live. Do note that even though the seats at the venue are available for free, it's on a first-come-first-serve basis. For the fans who don't want to get out of their places and face the scorching sun, the regional finals will be streamed live on YouTube. In fact, PUBG Mobile will also host an in-game stream from 2 PM IST and the players can also tune in from there. In addition, watching the event from the in-game stream will reward players with a YouTube crate that has been specially created for the event.

The regional finals of PUBG Mobile Club Open 2019 are live and if you're interested to watch 16 teams in action, the whole event will be streamed live on YouTube in English and Hindi.

The English commentators for the event include Jason Kaplan, Sudhen "Bleh" Wahengbam, Alex "Snodz" Byfield and John Allen. On the other hand, Vageesh "Anon" Bahn, Ketan "K18" Patel, Dharam "KingCharlie" Kundra and Mannu "Krat" Karki have been brought onboard and are tasked with the Hindi commentary.

PMCO 2019 will also bring back its resident EMCEE Abish Mathew who will resume his charge as the Ringmaster.

We've embedded both English and Hindi YouTube video feeds below for your convenience.